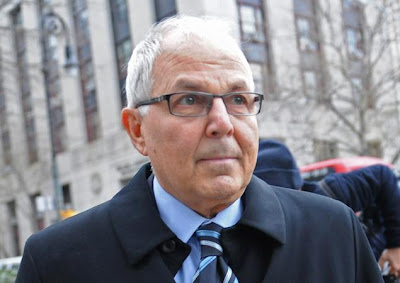 NEW YORK — The brother of imprisoned financier Bernard Madoff was sentenced Thursday to 10 years in prison for crimes committed in the shadow of his notorious sibling by a judge who said she disbelieved his claims that he did not know about the epic fraud.


Peter Madoff, 67, had agreed when he pleaded guilty in June to serve the maximum sentence allowable to the charges of conspiracy and falsifying the books and records of an investment adviser. He follows to prison his 74-year-old brother, who is serving a 150-year sentence after admitting he created a fraud so large decades ago that thousands of people lost $20 billion.

The judge said Peter Madoff, wearing a well-tailored charcoal suit, was "frankly not believable" when he claimed at his plea that he only learned of the fraud when his brother revealed it to him just before he surrendered to authorities.

Peter Madoff spoke briefly Thursday and less emotionally than in June, saying: "I am deeply ashamed of my conduct and have tried to atone by pleading guilty and have agreed to forfeit all of my present and future assets."

He added: "I am profoundly sorry that my failures let many people down, including my loved ones."

Two investors, among 40 who wrote victim impact statements, spoke during the proceeding, each describing the financial ruins of their extended family.

Investor Michael T. De Vita, 62, also called for truth, saying he believed "it to be physically impossible for a single person to carry out such a gargantuan task all by himself."

De Vita said investors "have waited four years for others to accept responsibility for this massive crime. We are still waiting for that today."

"All of this was preventable if only one person was willing to do the right thing and stop this in its tracks years ago. Peter Madoff could have been that person," he said.


Amy Luria Nissenbaum, 49, choking up at times, also complained that Peter Madoff had chosen even after his plea to "turn a blind eye," saying her home was in foreclosure and some days she struggles to "clothe and feed my children."

Nissenbaum said Peter Madoff was part of his brother's fraud for more than 30 years and he should serve the same amount of time in prison.


When Swain announced that Peter Madoff will not have to report to prison until Feb. 6, Nissenbaum laughed out loud bitterly. The delay in reporting to prison will let Peter Madoff attend his granddaughter's Bat Mitzvah on Jan. 19. He got into a BMW after he left the courthouse.

The judge noted that 10 years was the maximum sentence allowed by the charges to which Madoff had pled and repeatedly urged Madoff to relieve the pain of investors by revealing more about the Madoff business.

The magnitude of the damage done by the Madoffs cannot be underestimated, she said.

"Trust in financial institutions, thousands of individual lives and numerous charitable organizations have been blown apart," she said.

Assistant U.S. Attorney Lisa Baroni said it would have been easy for Peter Madoff to blow the whistle if he had even minimally carried out his duties. Instead, she said, he even teamed up with his brother to distribute the remaining $300 million in the company's accounts to family, friends and favored clients before the FBI put an end to that scheme by arresting his brother.

The sentencing comes four years and a week after Bernard Madoff first revealed the fraud, which occurred as the former NASDAQ chairman built a reputation for delivering unparalleled investment results, even in bad times. The revelation came only days after the business sent out statements that made investors think their investments had grown to a total of more than $65 billion.

Peter Madoff said at his plea that he had no idea his brother was running a massive Ponzi scheme, paying off longtime investors at times with money from newer investors.

"My family was torn apart as a result of my brother's atrocious conduct," he said. "I was reviled by strangers as well as friends who assumed that I knew about the Ponzi scheme."

Peter Madoff, who joined his brother's firm after graduating from Fordham Law School in 1970, has been free on $5 million bail after he agreed to surrender all assets.


Prior to sentencing, his lawyer, John Wing, said in a memorandum that Peter Madoff will "almost certainly live out his remaining days as a jobless pariah, in or out of prison." He called him a victim of his loyalty to his brother, saying he had been mistreated by the sibling who was eight years older and was viewed as "the prince" by his mother.


As part of a forfeiture agreement, Madoff's wife, Marion, and daughter Shana must forfeit nearly all of their assets. The government said those assets and assets that will be forfeited by other family members include several homes, a Ferrari and more than $10 million in cash and securities. It said his wife will be left with $771,733. Besides the Madoff brothers, no other family members have been arrested.

Though Madoff had been the firm's chief compliance officer for nearly four decades, the government marked his start in the conspiracy as 1996, when he created false and misleading compliance documents and false reports for the Securities and Exchange Commission.

Since the fraud was revealed, a court-appointed trustee has reached agreements to recover approximately $9.3 billion and is hoping to recover another $3 billion over the next 18 months. About $3 billion has been approved for redistribution to victims through an ongoing claims process.

Besides his brother, Peter Madoff is among six who have pleaded guilty in the case, including the former finance chief, a payroll manager, an accountant, a comptroller and a securities trader.

Five others face trial next year, including Bernard Madoff's longtime secretary. All have pleaded not guilty.
Posted by joe levin at 7:29 AM