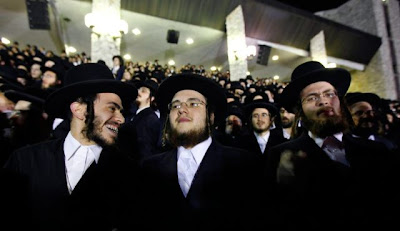 On Nittel Nacht – otherwise known to the world as Christmas Eve - Hasidic Jews believe that evil inclinations are at full force. In order to prevent any damages that may be caused from such phenomena, Hasidim refrain from learning Torah, so as not to let the demons gain, and abstain from fulfilling the mitzvah of being fruitful and multiplying.


No sexual relations. On this night, Hasidim believe, the klipot – vessels, or manifestation of evil forces – become stronger. Sefer Haminhagim (The Book of Customs) teaches that most heretics who abandoned their faith and converted from Judaism were born after illegal coupling on the first Christian's birthday.

Chess and card games. On Nittel Nacht, Hasidim enjoy an experience that is quite rare in ultra-Orthodox daily life – extra free time. In the folklore that developed around Nittel Nacht, chess has become the traditional game of choice. There's even a famous photo of the last Lubavitcher leader, Rebbe Menachem Mendel Schneerson, playing a game of chess with his predecessor (though it’s not even clear that the picture was taken on Nittel Nacht). Others prefer to play card games, such as a Galicianer version of poker, or the Hungarian game "21."


Ripping up toilet paper for Shabbat. Some rebbes used to mark the Gentile holiday by ripping up toilet paper for every Shabbat for the rest of the year. This was not just a simple show of contempt for those who believers in the Holy Trinity – it was a serious show of contempt. The books of the kabbalah treat Christianity as waste detached from the nation of Israel. The custom of ripping toilet paper has only dwindled because now it's possible to buy it pre-ripped. Other rebbes would take the opportunity to do their bills for the year, calculating how much they needed to put aside to fulfill the mitzvah of tithing.


There were pogroms anyway. There are a few reasons behind the unusual practice of not studying Torah on Nittel Nacht:

*According to the most practical explanation, on Christmas Eve the Jews had to close the synagogues and places of worship, and to turn off the lights in their houses, out of fear of pogroms. With time, the obligation not to study the Torah turned into an ideology.

* As this is a day of mourning on the day of the birth of the same man, a sort of Tisha B'Av of the winter, as on Tisha B'Av, studying on this day is not allowed. Why, then, did the Hasidim refrain from fasting and wearing sackcloth and ashes? Maybe for the same reason that they kept Nittel a hidden secret: for fear of the anger of the Gentiles.

*Jesus, so it is told in the Sanhedrin tractate, was one of Rabbi Joshua ben Parchia's students. The prohibition of studying is also meant to prevent the remembering of his right to study on that day, and in order that his soul does not gain a speck of transcendence after death.

Herzl didn't say. Over the years, the Hasidim developed a genre of Nittel jokes. For example: A Hasidic rabbi was asked to eulogize Herzl. After thinking on it briefly, he came up with three virtues: Herzl never spoke when putting on tefillin, he never thought about religious law in dirty places, and he never dealt with the Torah on Nittel. Another joke tells the story of a man who was asked why he does not stop studying Torah on Nittel Nacht. "I keep the Nittel according to the Armenian Christmas," he answered.

Orthodox Nittel. The fact that the Greek-Orthodox and the Russian Church celebrate Christmas on January 6 causes some confusion among the Hasidim. It turns out that this doesn't entitle them to two Nittels, and the instruction is that everyone should mark Nittel on the same day that Christmas is celebrated in their country of origin. The Galicians do this on January 6. The Belz Hassidim do it on January 5, and it is not clear why. In the U.S., according to the decision by the Lubavitcher Rebbe, Nittel must be marked on the night between December 24 and 25.


The klipot are out of control. There are those who are sure that there is no need to mark Nittel Nacht in Israel because of the holiness of the land. Rabbi Mordechai of the Slonim also ruled that in Israel the klipot are out of control, even in Jerusalem, where there are many churches. Despite this, the Lithuanians and the Sephardis did not adopt the custom, and study the Torah every day, including on Nittel.


Jews aren't allowed to learn. The origin of the name Nittel is unclear. The best explanation, even if it is not the most convincing, is that it is the initials for the Yiddish for "Jews are not allowed to learn." According to Wikipedia, "The name has its origins in the name given to Christmas in Latin in the Middle Ages – Natal Domini – the birth of the Lord (in ancient Latin – Dies Natalis, the day of the birth). An explanation given by the Shas journal Yom Leyom is that this is a confusion of the Latin name for Sylvester night, Natlus, although Nittel Nacht actually takes place at Christmas. The journal of Agudat Yisrael, Hamodia, provides another possible explanation, and reveals new information on the way that Christ was put to death: "As they did not want to say the name of that same man, the name of the wicked shall rot, they called him the hung man, as he was killed and hung from a tree."

Remembering to hate the goy. There is something strange in the abstention from Torah study precisely on the night in which the powers of evil are strengthening. And indeed, Torah study is apparently, according to Haredi Jews, the best answer for this. The Nittel Nacht is actually a night of remembrance of the persecution of the Jews by the Christians and the night in which it is remembered to hate them, therefore the rest of the details aren't so important. And as the Lithuanians say, Hasidic Jews will never give up an opportunity to cancel Torah study.