LAPD: DEA not cooperating on probe into suspect’s death 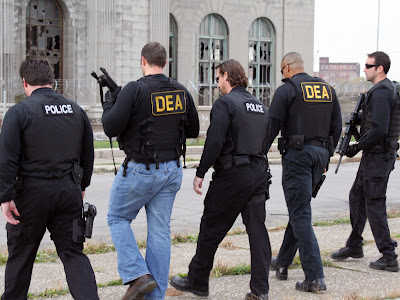 Los Angeles Police Department officials said their efforts to investigate an in-custody death of a drug suspect has been hampered by the U.S. Drug Enforcement Administration, which has refused to allow its agents to cooperate for more than two years.


The suspect died shortly after he was arrested in a DEA operation, according to LAPD records. An autopsy found that the suspect's ribs had been fractured in 21 places and coroner's officials concluded that the injuries were caused by "blunt force." The fractures led to internal bleeding, which ultimately killed the man, the coroner found.

Without assistance from the DEA, they cannot determine how the man's injuries occurred, according to documents reviewed by The Times.

The LAPD believes DEA agents may have caused the injuries when they placed the suspect on his stomach while handcuffing him, according to the documents. But without being able to interview the DEA agents who made the arrest, it's impossible for the detectives to determine whether excessive force was used.

Dawn Dearden, a spokeswoman for the DEA, said the U.S. Justice Department's own Office of the Inspector General is conducting an investigation into the death to determine whether DEA agents broke federal civil rights laws by using excessive force when arresting the man. Dearden said the DEA has provided the LAPD with some information and documentation about the incident.

"However, it is not uncommon for an agent under multiple ongoing investigations to decline specific law enforcement interviews until an inspector general investigation is completed," she said.

LAPD officials said they need to conduct their own homicide investigation. Chief Charlie Beck outlined the department's struggles with the case in a report recently submitted to the Los Angeles Police Commission. Beck reports to the civilian panel on all serious use-of-force cases and in-custody deaths.

Beck wrote that his detectives had made "numerous requests" to the DEA for interviews with the involved agents but have repeatedly "been met with negative results."
Posted by joe levin at 2:46 PM