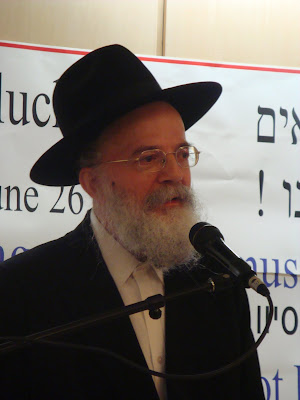 Despite efforts by Habayit Hayehudi Chairman Naftali Bennett to portray himself as a right-wing moderate, it seems that reality on the ground is working against him.


Rabbi Shalom Dov Wolpe, known for his extremist views, is apparently one of Bennett's supporters. Wolpe did not hide his support for Bennett over the weekend and sounded encouraged by Bennett's call to refuse orders to evacuate and dismantle Jewish settlements. Bennett has been in the news for the past few days for stating in a television interview that he would likely refuse orders to evacuate Jews from their homes.

Wolpe publishes and distributes a pamphlet that was circulated in various synagogues over the weekend. The pamphlet was said to present the positions of some Habayit Hayehudi members, including Bennett, and encouraged support for them.

In the past, Wolpe called for shooting at Israeli soldiers if they tried dismantling Jewish outposts. In an interview on Israel Radio in March 2011, Wolpe said, "The army decided to fight against the settlers, against the people of Israel in the land of Israel. So when Jews or Arabs come, as happened at the Havat Gilad outpost, to destroy homes, and they fire rubber bullets, rubber bullets must be shot back at them."

In 2008, he said: "The terrible traitor, Ehud Olmert [then prime minister], who gives these Nazis [the Palestinians] weapons and money and releases their terrorists and murderers — this person, like Ariel Sharon, is a Nazi collaborator. If we had the rule of law here, his fate, along with Haim Ramon, Tzipora [Tzipi] Livni and all of those people, would be to hang."