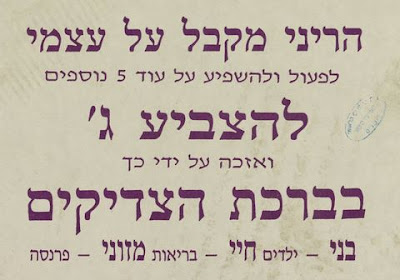 A confused listener called in this week to a political talk show on the Shas-affiliated radio station Kol Barama. The listener is a student of Rabbi Amnon Yitzhak, the founder of the new political party Koah Lehashpia, which is targeting the same voters as Shas. He was distraught by an interview Yitzhak had given the day before in which he said he would not take into consideration the views of the spiritual leader of the Shas party, Rabbi Ovadia Yosef.


"I don't know anymore what to believe," the listener complained on air.

The call was just the latest sign that even the sacred cows of the ultra-Orthodox are being taken out for the slaughter this election season, sowing confusion among voters and signaling a possible reduction in parliamentary power for the Haredi parties.

Instead of continuing to be treated as a sage who should be obeyed without question, Yosef has become a punching bag. At the same time, the rivalry between two ultra-Orthodox leaders is threatening to split the non-Hasidic Ashkenazi Haredim, while small political movements are attacking rabbis from both the Shas and United Torah Judaism parties. The infighting is expected to cost the more established parties, especially UTJ, dearly at the polls, though the extent to which they will be affected remains to be seen.


In the run-up to the January 22 election, what's happening among Haredim - Sephardi and Ashkenazi alike - is that the once-holy has lost some of its sanctity, and authority figures have become less authoritative.

Heresy on the air

Kol Barama operates under the aegis of the Second Television and Radio Authority, but was founded by Shas and follows rules set by its spiritual guidance committee, including not putting women on the air more than twice a week.

But on Tuesday the radio station aired live heresy. It gave prominent coverage to an interview with Yitzhak, which is itself unusual in light of the fact that he has rebelled against Shas and founded his own rival party. Then the station let him keep going once he began putting down Shas' spiritual leader, along with Ovadia Yosef's son, Shas wheeler-dealers and the radio station itself.

The program then interviewed Rabbi Shimon Badani of Shas, who called for Yitzhak to be ostracized. But that too was part of the circus. Yosef, Yitzhak and their respective supporters all seemed like contenders in one big boxing ring, holding up their fists as they sought to consolidate their power.


Another Shas defector, Rabbi Chaim Amsellem, is trying to promote his new party, Am Shalem, in part through a book of his that came out earlier this month in which he refers to Yosef's sons as a "sophisticated gang that is systematically shaping" their father's views. He writes that "quite a few rabbis are critical toward him, but are terrified of being the targets of all-out war."

Degel Hatorah at risk of split


And not only are Yitzhak and Amsellem waging a frontal assault on Shas' spiritual leader, but the usually self-censoring Haredi press is playing along.

It's not so easy at the top of the Ashkenazi ultra-Orthodox heap either, lately.

Degel Hatorah, the so-called Lithuanian (meaning non-Hasidic ) faction of United Torah Judaism, seems on the verge of being torn into two due to the rivalry between those in control - Rabbi Aharon Leib Shteinman and other rabbis from Bnei Brak, and a smaller group from Jerusalem.

Rabbi Shmuel Auerbach, the leader of the Jerusalem group, is expected to decide shortly whether to support Netzah, a breakaway political party registered by his supporters.

This infighting is about ideology as well as ego. Auerbach is close to the more extremist Haredi groups and opposes adopting the more pragmatic approach that some of the Bnei Brak rabbis espouse. He recently instructed his followers not to respond to military draft notices.

Though Netzah appears to have virtually no chance of winning enough votes to get into the Knesset, the rift could still harm the political chances of UTJ, since Auerbach has thousands of students whose votes the party would lose.

The internal split would also probably be a source of friction between Degel Hatorah and its Hasidic partner in UTJ, Agudat Yisrael, since both factions would be affected by a drop in seats for the party as a whole.
Posted by joe levin at 8:25 AM