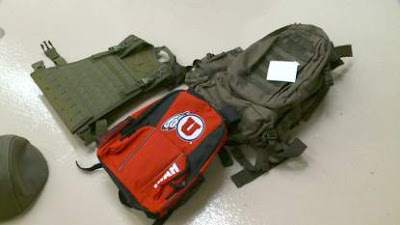 The backpacks, which retail for as little as $300, will stop a bullet fired from a .357 Magnum and feature an armor component that weighs just 10 ounces, Williams said. He declined to discuss specific sales figures.

“It’s so lightweight, it only adds 10 ounces to their backpack,” the father of six told FoxNews.com. “Would this armor have helped the kids in Connecticut? We don’t know, but any armor is better than no armor.”

Williams said Amendment II has been selling its products to police and military agencies for years now and began putting sheets of the material in children’s backpacks a year ago. He rejected any suggestion the company is seeking to cash in on last week’s shooting in which a deranged man killed 20 children and six adults at the school using a Bushmaster semiautomatic rifle.


“We do not want to sensationalize this any more than it already is,” he said. “The fact of the matter is, in today’s world, this need exists and if we have the technology to protect people, why would we not allow them to purchase it?”

The company has received “quite disturbing” phone calls recently, Williams said, including correspondence from Italy.

“They’re calling us murderous, hateful pieces of garbage,” he said. “We’re being painted as warmongers here.”

Parents, meanwhile, had mixed reactions to the concept of bulletproof backpacks, with some believing they would instill even more fear into young students.

“I’d rather have an administrator or a teacher be armed and trained to handle situations like that if they were to occur,” Laron Zaugg told Fox 13. “But having a child always having to think about that and be prepared for that every day as they get ready for school would be way over the top.”


Maryann Martindale, executive director of the Alliance for a Better Utah, questioned the necessity of the backpacks and instead called for a more reasonable approach to gun laws.

“I think when these things happen we have the chance to ask ourselves tough questions,” Martindale told Fox 13. “One of those is what kind of a society do we want to live in? Do we want to live in a society where we send our kids to school in Kevlar backpacks and arm our teachers? I think we create more chaos by responding that way.”

Sales of guns have also increased dramatically since Friday’s shooting. The Colorado Bureau of Investigation said it received a record 4,154 requests for background checks on Saturday, the day after the shooting. That was slightly more than on its normal biggest day, Black Friday.

Bob Irwin, CEO of The Gun Store in Las Vegas, said customer traffic had jumped since the school shooting, as many customers are concerned that more restrictive gun laws will be enacted. Irwin has not pulled any guns from the shelf, he said.


"My belief is the individual nutcase did this," Irwin said. "The company that manufactured the gun didn't. That seems silly, to deprive my normal customers of product because somebody misused a product from the same company."

Walmart, which offers Bushmaster rifles in some stores, said it would not change the guns it sells, but company spokesman David Tovar said the web listing for the Bushmaster "was taken down in light of the tragic events."


Investors on Tuesday shunned some of the nation's largest gun makers, putting up for sale the manufacturer of the Bushmaster semiautomatic rifle as stocks of other gun companies fell. Private-equity firm Cerberus Capital Management announced it would sell the maker of the rifle used in the massacre, which it called a "watershed event."

Dick's Sporting Goods suspended sales of all "modern sporting rifles," the industry term for military-style guns. The company also removed all guns from display at its store closest to Newtown.