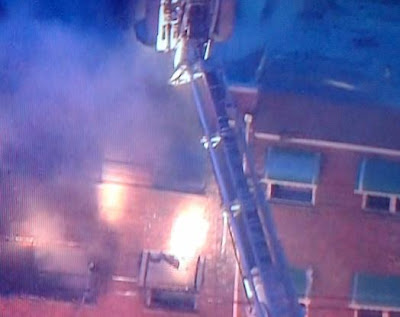 
The fire broke out at about 5:45 a.m. and grew quickly to three alarms at 733 Beach Avenue and Lafayette Avenue in the Soundview section.

Fire tore through the roof of the three-story building and spread to adjoining homes.

Three people were killed in the fire.

“Two adults, approximately in their 70s. They were found on the second floor,” Assistant Chief Ron Spadafora told 1010 WINS reporter Gene Michaels. “And one young teenager, a boy, found in the rear on the third floor.”

The names of the victims haven’t been released.

The second and third floors collapsed and the roof is gone. Fire officials are now talking to people who lived in the house, as well as neighbors, to find out what they saw.

The fire was brought under control around 7:20 a.m.

Fire officials deemed the blaze suspicious and are investigating the cause.

“I brought a ladder from my building, and pulled it up to help the old lady, but it was too late,” Lewis said.

“They are a nice, tight family, very nice,” said Desherma Lang. “They never bother nobody, and they just got along with everybody.”

“I am devastated,” said Milagros Gutierrez. “I can’t even cry no more.”

The Red Cross is helping tenants in the building and nearby who were forced to evacuate.
Posted by joe levin at 1:29 PM