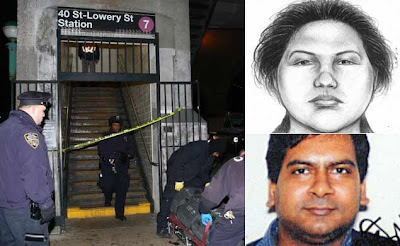 NEW YORK - Police have a suspect in custody for the subway pushing death of a Queens man.

Detectives questioned a 31-year-old woman and said she "made statements implicating herself." NYPD spokesman Paul Browne said they are not releasing the suspect's name until she is formally charged.

Police apprehended the suspect around 5:00 a.m. early Saturday morning on the corner of Empire Boulevard and Bedford Avenue in Crown Heights, Brooklyn.

She was wearing the same jacket in the surveillance video the night she fatally shoved 46-year-old Sunando Sen into the path of a No. 7 train at the 40th Street-Lowery stop in the Sunnyside section Thursday night.

Sen, a Queens resident who was born in India and co-owned a Manhattan print shop, was waiting for the train around 8:00 p.m. when the woman came behind him and shoved him onto the tracks. The suspect was seen mumbling to herself on the platform before she approached Sen.

The woman fled the scene after the attack and authorities released surveillance video showing her running from the station.

Her relatives called police last night after seeing her on the news, according to the New York Post.