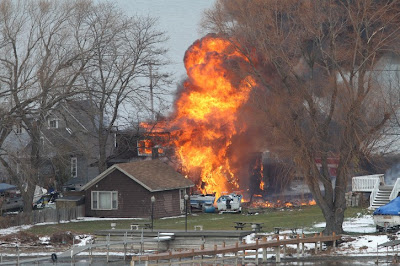 Webster, NY - Police have found human remains in the burned-out home of the Webster, N.Y., ex-con who killed two firefighters and believe the victim is the gunman’s sister.


Police Chief Gerald Pickering said Tuesday the remains were found in the charred house that 62-year-old William Spengler shared with his 67-year-old sister, Cheryl. A medical examiner will need to determine the identity.

Police say Willliam Spengler armed himself with a revolver, shotgun and military-style rifle before he set his house afire to lure first responders into a pre-dawn death trap on Christmas Eve.

Pickering says Spengler “was equipped to go to war.”

Spengler killed himself as seven houses burned around him. A friend said Spengler hated his sister but police say a motive hasn’t been determined.
Posted by joe levin at 5:11 PM