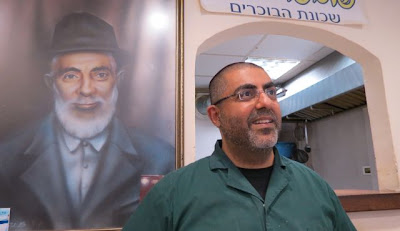 In Jerusalem, a falafel is never just a falafel, and a falafel stand can be akin to a place of worship. In addition to being a long-time local landmark in Mea She'arim, the ultra-Orthodox neighborhood of Jerusalem, Falafel Shlomo one of West Jerusalem's best-known falafel stands, was crowed "Best in the Country" by Channel 2 news in the 1990s and was confirmed as such by a subsequent nationwide poll.

That's an impressive achievement for a falafel stand that's older than the state of Israel itself. It has seen the city and the country change drastically around it, all while consistently producing the perfect falafel. In Mea She'arim, history and fast food are peculiarly interwoven.


"The Brits used to eat here," Shai Tzadok, who runs Falafel Shlomo, says proudly of the place that his father, Shlomo, opened in 1946, referring to the British soldiers in pre-state Mandatory Palestine.

He points out the early 20th century inscription on the front of the building, dedicating it to the religious needs of the Buchari community, then brings me to the back where an iron lid now covers the pool of the old mikveh, which is a source of mold on Falafel Shlomo's walls, but what can you do? The synagogue is still active on the second floor.

When Falafel Shlomo opened, Mea She'arim and its neighboring enclaves were far more mixed. The pious and less pious shared the neighborhood, as did Sephardi and Ashkenazi Jews.

Today, even the Buchari neighborhood, named after the city in Uzbekistan where its founders originated, is mostly Ashkenazi and ultra-Orthodox.


Falafel Shlomo offers an exception to the East European culinary traditions described in the previous installment of this series. Shai's Yemenite origins inspire the mix of Yemeni, Palestinian and other Middle Eastern goodies at the stand.

On Fridays it joins many businesses in the neighborhood in offering prepared food for families for the Sabbath. The tables are removed and the interior fills with the scent of salmon in mustard and Yemenite gizzard soup.


The falafel stand has its legions of fans, old and new, but one particular regular beats them all: a secular woman in her seventies who grew up in the neighborhood and now lives in the suburbs. She ate here when Shlomo first opened the place; in 1947, she stood in line behind those aforementioned British soldiers.


Modern businesses do pop up here and there, a burger bar and a slick ice cream parlor, but big chains are absent. Even Israel's kosher McDonald's is unwelcome: It would never prove kosher enough in a place where people are particular about which rabbi supervised the slaughter of which chicken.

Without the golden arches and other indications of contemporary culture, a walk down the borough's main commercial drag, Malchei Yisrael St. is powerfully nostalgic.

Visits to Mea She'arim are often likened to journeys into the past, specifically into 18th century Poland, but Jerusalem of the 60s, 70s and 80s is frozen here too. The street this is now the only source in town for such bygone goodies as red, rooster shaped lollypops.

The buttery, roasted smell evokes the iconic Edison movie house, a secular anomaly on the border of Haredi and secular Jerusalem that used to operate in the building next door.


It closed with the Haredi takeover of the area and the building has been demolished over the years, leaving only the smell of popcorn behind.

Large signs scattered around the small shops declare Doron's popcorn and roasted nuts to be "of Jewish roasting".


"Some foreigners are bothered by this," he admits, "They say it reminds them of signs from 60 years ago, but really there's no racism involved. Truly observant costumers simply can't consume nuts unless they're certified like this.

In most cases a non-Jew can be involved in the roasting, but a Jew must light the fire, or physically stick them in the oven. The rabbis differ on this, and the Ashkenazim are atypically less strict."


One establishment that certainly errs on the side of strict is the neighborhood's oldest pizzeria, Pizza Uri. Here, large and clear signs designate separate queues: one for ladies, one for gents. Men who feel uncomfortable eating in the company of women may retreat to a separate section.

Owner Yaakov Uri is proud of his truly delicious pizza, but somewhat reluctant to interview. The place, established in the mid-70s and one of the city's first three pizzerias, has a unique history but Uri is worried: "Any press may bring us women who are not modestly dressed. I am personally not offended by that, but other costumers may be."

I sit down to enjoy my pizza and soon Uri joins me, unable to hold back the stories. He begins with his father, born in 1898, who fought for the Austro-Hungarian Empire in the First World War.


Alexander Uri was an activist with the left-leaning "Hashomer Hatzair" youth movement and helped establish Kibbutz Beit Alfa in the Jezreel Valley in the north.

Then he became ultra-Orthodox and had 11 children. In Jerusalem, a pizza is never just a pizza.
Posted by joe levin at 2:31 PM