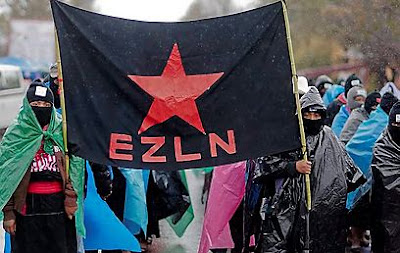 MEXICO – Chiapas is one of Mexico's most exotic federal districts. But the magical forests, appealing Indian communities, colorful towns and intriguing archeological sites – that serve as main tourist attractions – hide a political hell.

In the mid-1990s, a leftist resistance group which calls itself The Zapatista Army of National Liberation (EZLN) made Chiapas its home. Its attempts to fight the Mexican Army repeatedly failed, but the Zapatistas are still very active in the district's rural areas.

Chiapas is considered a dangerous place, where every home has an arms arsenal of its own; and like many other places in Mexico, Chiapas' streets have become the battlefield where the government and local drug lords wrestle for dominance.

Chiapas, however, harbors an even more sinister secret: It is also a hub of radical Islamist activity.


Catholic Mexico is in the midst of a crisis of faith. According to a local businessman, who asked to remain anonymous, it is widely believed that within a decade, Chiapas will be the first federal state in Mexico to turn its back on the Church.

"The Muslim missionaries are very active there," he said. "It's hard to know exactly how many people have converted to Islam over the past few years."

Official data suggests that Mexico is home to some 4,000 Muslims – a fraction in a country whose population numbers 115 million. Theoretically, this is a negligible number, but it is enough to cause concern in the United States – and Israel should be concerned as well.

US intelligence indicates that Mexico is home to some 200,000 Syrian and Lebanese immigrants – most of them illegal – who were able to cross the border via an extensive web of contacts with drug cartels, both in Mexico and in other countries in South America.

These cartel contacts smuggle illegal immigrants – including individuals affiliated with Iran, Hezbollah, al-Qaeda and other radical Islamist groups – into Mexico, placing them a virtual stone's-throw away from the United States.


Western intelligence agencies have been able to gather ample evidence suggesting that the drug cartels in Mexico – which are the de facto rulers of the northern districts bordering the US – are in cahoots with Islamic terror organizations, which are eager to execute attacks against American, Israeli, Jewish and western targets; but most of all, the Islamic terror groups are eager to make money, so they can fund their nefarious aspirations.

In December 2011, the US authorities released an indictment filed against Lebanese drug lord Ayman Juma, which exposed Hezbollah's involvement with the Los Zetas drug cartel. According to the US Drug Enforcement Agency (DEA), Los Zetas is the most technologically advanced and most dangerous cartel operating in Mexico.

Juma was indicted in absentia for smuggling 85 tons of cocaine into the US and for laundering $850 million for Los Zetas. He was also accused of serving as a go-between for the Mexican crime syndicate and the Shiite terror group.

According to US officials, for a modest 8%-14% commission, Juma's money laundering process would take about a week. The operation involved bank accounts in dozens of countries, making it virtually impossible to track the dirty money.

According to the indictment, Hezbollah is using Juma's cartel connections to minimize its dependency on Iranian funding. The international sanctions crippling Tehran's economy have taken a serious bite out of the $200 million in annual aid given to Hezbollah, but the latter's appetite for cash has only grown. Los Zetas' Beirut-based money man has reportedly helped the Shiite terror group meet its financial needs.

The ties that bind

Iran denies any involvement in South America, but the US knows better. In 2010, a report commissioned by the House Committee on Intelligence found that the ties between Hezbollah and the Mexican drug cartels, as well as the Iranian link, were getting stronger.


The report found that Hezbollah was massively embroiled in drugs and money laundering deals, as well as in arms trafficking in and out of Mexico.

Furthermore, US intelligence concluded that Hezbollah has established sleeper cells, intelligence infrastructure and training bases in Mexico and other South American countries. The Shiite group is also helping the drug lords build smuggling tunnels under the US-Mexico border and satellite images show that they are nearly identical to the maze of tunnels running under the Gaza-Egypt border.

Hezbollah is also training the cartels' operatives in the dubious art of explosives, helping drug lords improve their bomb-making skills.

The committee found evidence that Hezbollah and Iranian Revolutionary Guard officials pick up fake passports in Venezuela – a close ally of Iran – prior to infiltrating the United States.

The US' concern about the smuggling tunnels increased exponentially in 2009, when a Department of Homeland Security wiretap derived a recording of Professor Abdallah Nafisi, a Kuwaiti clergyman and a known al-Qaeda recruiter, boasting about the ease by which nonconventional warfare and weapons of mass destruction can be smuggled into the US, through the Mexican drug tunnels.

"Ten pounds of anthrax in a medium-size suitcase, carried by a Jihad warrior through the tunnels can kill 300,000 Americans in one hour," he said. "It will make 9/11 look like peanuts. There's no need for plans… Just one courageous man, to spread this confetti on the White House lawn. Then we will really be able to celebrate."

"Hezbollah, more than any other terror group, manages to utilize its Mexican-based cells, which it has turned into instruments of capital and terrorism, ready to be called upon once the moment serves its interests," a 2010 Department of Homeland Security report said.


American officials do not hesitate to publicly point the finger at Hezbollah. Secretary of Homeland Security Janet Napolitano said that Hezbollah has "massive presence in the triangle made up of Argentina, Brazil and Paraguay, and the organization is constantly expanding its ties with the Mexican drug cartels."

A recent book by Latin America expert Jon Perdue details the dangers the US and its allies face as a result of the presence of radical Islamic terror groups in South and Central America. According to Perdue, Iran's proxies have been around long enough "to pose an actual threat" to the US should Israel mount a unilateral strike on the Islamic Republic's nuclear facilities.

But why are the local communities in Mexico so eager to answer radical Islam's call? The answers to that vary.

First, most Middle Eastern migrates have been able to make a successful life for themselves in Mexico. For example, Carlos Slim Helu – one of the richest men in the world, with a personal fortune of $77 billion – immigrated to Mexico from Lebanon. Such ties make for an easier landing for Hezbollah operatives in Mexico over other places.

But mostly, Chiapas – like other places in Mexico – is plagued by poverty and a civilian sense of deprivation. The district is home to the decedents of the Mayans, who have been exploited by local governments dating back to the days of the Spanish Conquistadors. They have revolted against their discrimination repeatedly, but to no real success.

Against this bleak backdrop, a monotheistic revolution is taking place – at least according to Muslim websites – as thousand of South Americans shed the Catholic beliefs forced on their forefathers by the Spaniards hundreds of years ago, in favor of Islam.


Ironically, missionary Islam arrived in Mexico from none other than Spain. In the mid 1990s, Muslins from the al-Murabitun order, or "Almoravids," as they are known, were sent to Chiapas. The Almoravids strongly oppose any use of violence or terror, but since the order is very secretive, little is known about the true nature of its work.

Various Mexican reports suggest that the Almoravids are linked to neo-Nazi groups and foster anti-Semitic ideology; and that they aspire to convert all of Europe to Islam and enact the same style of Islam prevalent in the days of the Prophet Muhammad.

Another organization spreading the word of the Prophet in Mexico in the Islamic Cultural Center of Mexico, a Sunni organization set up about 15 years ago. The center funds translation projects and major construction projects for mosques and Muslim social centers.

No one knows who funds the work done by the Islamic Cultural Center of Mexico or by the Almoravids.

"It's hard to know whether the recent Islamization here stems from deep spiritual convictions or from opportunistic financial motives," a Mexican academic, who has been tracking the phenomenon, said.

"It is likely due to the combination of both. Islam can easily be adapted to the classic way of life of the native Mexican communities. It's enough to present Islam as a religion that promotes social causes, one that is anti-capitalist and tolerant of all races, to prey on the locals' sense of discrimination and win their sympathies."

The bottom line may prove to be a bitter pill to swallow for the US: It is very likely that in a few years, the US – much like Israel – will have to deal with its own Hezbollah presence, right across the border.
Posted by joe levin at 5:45 PM