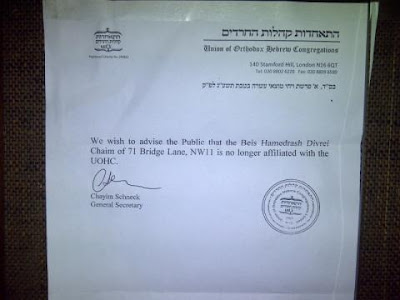 LONDON — In an unprecedented and potentially explosive move, the Union of Orthodox Hebrew Congregations, the umbrella organization for Britain’s Orthodox institutions, has expelled a synagogue led by a rabbi accused of sexual misconduct.


Beth Hamedrash Divrei Chaim, in the London neighborhood of Golders Green, is headed by Rabbi Chaim Halpern, a former religious judge in the Union and one of the city’s most senior Haredi rabbis.

He was forced to resign all of his public positions in November following allegations that he had engaged in “inappropriate” conduct with about 30 women coming to him for counseling, but retained leadership of his shul, which is located in his house.

Since then, a group of local rabbis and religious judges have called on him to resign from his pulpit as well, to no avail. In response to intense pressure from the Haredi public, the Union agreed to set up a beth din, or religious court, to try the case, but it has yet to convene.

According to one source, the expulsion of Divrei Chaim means that the beth din is now unlikely to go ahead, as Halpern is no longer affiliated with the Union.

It will also remove the issue of Halpern’s conduct from the agenda of the local rabbis, as he has effectively become a private individual.

“As far as we are concerned, the job is now done,” said one rabbi involved in efforts to persuade Halpern to step down. “The Union doesn’t want anything to do with him anymore.”

When several senior Golders Green rabbis issued a statement calling on Halpern to resign,”the Union fought it, as it it was completely invalid,” the rabbi said. “Now they have seen there is no way out.”

The decision to remove Divrei Chaim from the Union was apparently made by Rabbi Ephraim Padwa, the head of the organization, to counter a growing threat that other synagogues affiliated with the Union in Golders Green were going to leave the group to protest the handling of the case.

The Union, according to these rabbis, was too slow to act — partially out of deference to Halpern’s father, Rabbi Elchnonon Halpern, another leading London figure — and had blocked efforts to censure him.

Last Tuesday, one of the largest Union-affiliated shuls in Golders Green, Beth Yisochor Dov (known as Hager’s), discussed leaving the union, without reaching a final decision. Another, North Hendon Adass, is reported to be considering a similar move.

The threat that may have prompted the Union to take decisive action was the prospect that Golders Green shuls that left the Union would form a new, competing Haredi organization. That body could have created its own kosher-certification body to rival Kedassia, the Union’s powerful, respected and income-generating food division. The new group, which would initially cover only chickens, has apparently been in the works for some months; it would be run by a Stamford Hill rabbi who already produces kosher milk.

The rebellion of the shuls in Golders Green has exposed deep divisions between Haredim in that neighborhood and in Stamford Hill, the North London community where the Union is based, and where Halpern’s alleged victims came from.

Golders Green is considered far more modern, with the majority of the men working, widespread access to the Internet and overseas vacations, for example, not uncommon. Stamford Hill, by contrast, has in the past 20 to 30 years become dominated by Hasidim, who avoid secular education and the professional world.

Of the more than 100 congregations in the Union, about 20 are in the Golders Green area.

When the Halpern scandal broke, rabbis in that neighborhood led efforts to remove him immediately from all positions of authority, while many of their Stamford Hill peers wanted to wait until the case had been judged by a religious court.

The Halpern saga, said one rabbinic source, merely “lifted the lid on what was already going on” between the two communities. “It had been simmering for a long time. [Halpern] brought it all to a head.”

‘As far as we are concerned, the job is now done. The Union doesn’t want anything to do with him anymore’

He called the gap between the two areas “a huge chasm.”

Should the two communities split, it could have far-reaching implications for religious life in London. Residents can expect the differences between the areas to become more pronounced, with the Hasidic influence on Golders Green and its environs — until now mostly promoted by the Halpern family — diminishing.

Meanwhile, more moderate elements in Stamford Hill could find themselves isolated, and may choose to band together with the Golders Green congregations, or even to move there. Should Kedassia’s meat business be harmed — it currently claims about 15 percent of London’s kosher meat market, sources said — it would significantly impact the Union’s own budget. The organization’s financial resources would also be deeply reduced, of course, if a large number of communities seceded from its control.

Another potential casualty could be Padwa himself, who has allegedly struggled over decisions that might hurt his friend, Elchonon Halpern. Padwa is said to have tried to quit as head of the Union at least once recently.

The effects of his belated effort to address the Halpern scandal and limit damage to the Union remain unclear.

“There is no question that had Divrei Chaim been part of the Union, we couldn’t have carried on,” said a member of Hager’s. “But it’s very late in the day. A lot of damage has been caused.”
Posted by joe levin at 8:34 AM