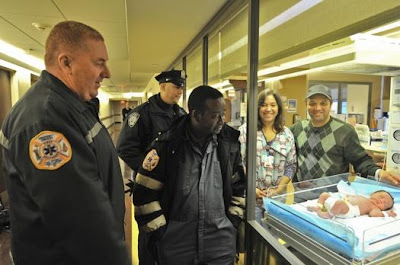 This was one rushed commuter.

A New Jersey woman gave birth to a healthy baby boy just outside the Holland Tunnel in New York this morning, authorities said.

Soukaina Nekhlaoui, her husband and her mother were driving to Luthern Hospital in New York from their home in Lodi, NJ, when they realized their impatient little boy wasn’t going to wait.

The frantic father, Abdel Elkarhat, pulled over just outside of the tunnel just after 7 a.m.
“The father was really frantic. He was running around the vehicle yelling ‘help me, help me.’ The grandmother was outside (the vehicle),” said veteran Port Authority officer George McCann.

McCann and his partner, Jean Bernard, rushed to the car and found that the baby’s head was already coming out.

McCann helped guide the baby’s shoulders out, then tapped the baby on the arm.

“The baby looked up at us - more or less looking at us like, ‘Why are you bothering me. Let me go back to sleep,’” Bernard recalled.

McCann then created an “oxygen tent” around the baby using a wool blanket to protect him from the dangerous car fumes, he said. EMTs soon arrived and help clamp the cord.

Both mom and baby were taken to New York Downtown Hospital in stable condition. A hospital spokesman said baby wasn’t due until Feb. 7, but Soukaina was starting to feel discomfort and so they decided to go to the hospital Luthern Hospital — where the baby's big sister was born — as a precaution.

McCann and the others who helped deliver Nassim later presented him with a “Holland Tunnel” baseball cap as mom thanked them for their help.

The couple named the boy Nassim Mohammed Elkarhat, which means “scent of a morning flower” — exactly the opposite of what the Holland Tunnel smells like.
Posted by joe levin at 6:57 PM