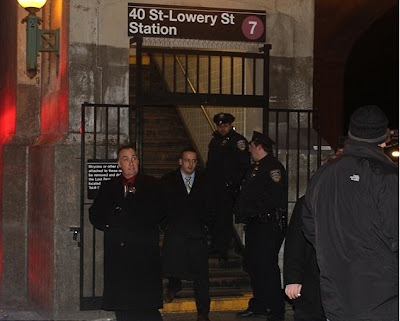 A young woman shoved a helpless straphanger into the path of an oncoming Flushing-bound 7 train in Queens Thursday night, killing him, police said.


The heavyset Hispanic woman was seen by at least five witnesses pacing and mumbling to herself on the 40th St. station platform in Sunnyside about 8 p.m., said NYPD spokesman Paul Browne.

She eventually took a seat on a bench about 20 yards from the victim, who stood on the platform’s edge and did not appear to notice her.

“She was seated alone and then waited until the train came into the station and approached this individual from behind and pushed him in front of the train,” Browne told reporters at the station later Thursday night.

The suspect, believed to be in her 20s and about 5-foot-5, bolted down a flight of stairs and fled onto Queens Blvd., police said.


The woman was wearing a gray, blue and white ski jacket and pair of gray and red Nike sneakers, witnesses told police.

Investigators do not believe the man knew his attacker.


There was no surveillance camera on the subway platform, but police are reviewing footage from ones near the station’s entrance.

At 1:35 am, medical examiners removed the body of the man and carried the body bag down the exit stairs of the 40th street station on the 7 line and loaded it onto a gurney waiting underneath the tracks.


The man’s death marked the second time this month that a person died as a result of being pushed in front of a subway train.

In early December, a 58-year-old Queens man named Ki-Suck Han was crushed to death by a Q train at the 49th St. and Seventh Ave. station. Police later arrested Naeem Davis, 30, and charged him with second-degree murder.

A surveillance video in that case showed that the men were arguing in the moments before the fatal push.