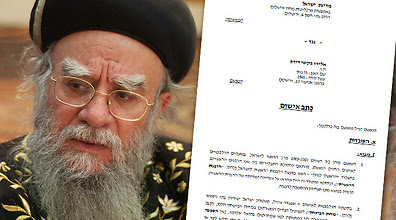 Former chief Sephardi Rabbi Eliahu Bakshi-Doron was indicted for fraudulent receipt of goods or services under aggravated circumstances on Monday for his role in the so-called "rabbis' file" affair, in which hundreds of security forces officers were ordained as rabbis in order to qualify for a pay raise.


According to the indictment, which was filed with the Jerusalem District Court, between 1999 and 2003 some 1,500 police officers, soldiers and cadets attended various religious colleges for a number of hours a week but were granted diplomas for completing five years of studies. The certificates enabled the individuals to receive pay raises from the State.

According to the indictment, following a request submitted by several of the classes participants, Bakshi-Doron (71) ordered his right-hand man Rabbi Yitzhak Ohana, who heads the testing and ordaining division of the Chief Rabbinate of Israel, to award the program's graduates with a higher education religious studies diploma, which grants a pay raise equivalent to an academic degree.

The former chief rabbi instructed Ohana to disregard the criteria for obtaining the higher education religious studies diploma and "seal the deal," the indictment states.

The Jerusalem District Prosecutor's Office claimed that when he instructed Ohana to issue the certificates Bakshi-Doron was aware that the security officers did not meet the criteria.

The indictment further claimed that Bakshi-Doron was aware the diplomas would grant the officers significant State-funded salary increases. The former chief rabbi authorized the illegal operation to avoid a confrontation with those who sponsored and managed the religious colleges attended by security personnel, according to the prosecution.

The rabbi was also indicted for attempting to fraudulently receive goods or services under aggravated circumstances and breach of trust.
Posted by joe levin at 6:08 AM