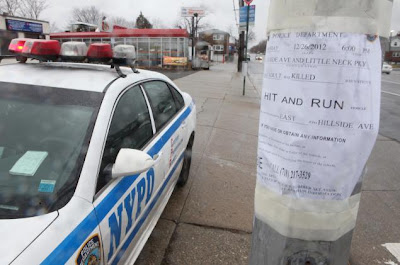 It was a trifecta of tragedy.


In Queens and Manhattan, friends and family mourned the deaths of three women killed by vehicles amid Wednesday’s dreadful and deadly weather.

Aileen Martinez, 33, had just finished her shift at Bergdorf Goodman at 8:45 p.m. when she was struck by an express bus at Central Park South and Seventh Ave., a witness said.

A witness said that before Martinez was hit by the bus, a taxi struck her and took off. But police could not confirm that detail and said no criminality was suspected.


In uptown’s Hamilton Heights, friends of Martinez were stunned by her death. Only days ago, she had shared her resolutions: She hoped to move to a neighborhood with more nightlife and land a new boyfriend.

That fateful night, Martinez told Samaroo she could go home early to watch the Kennedy Center Honors ceremony on television.

Martinez was a native of the Dominican Republic, and her mother in that country was stunned by news of the death.

“She’s in very bad shape. She kept saying it’s her only daughter. She’s devastated,” said Jose Perez, a friend of Martinez. He added that every month, Martinez sent $200 to her mom.

Earlier in the evening, a pair of hit-and-runs left two Queens women dead and their families devastated.


At about 6:45 p.m., a reckless driver in the driving rain claimed the life of Maria Beria in Jamaica.

Beria, 30, was crossing 111th Ave. near 147th St. to give her nephew, Bhudesh Misir, a ride home. A white vehicle came careening down the avenue and struck Beria, police said.

Bhudesh, 16, said the impact sent her flying three car lengths through the air.

“The other guy was coming at full speed and that’s when she got hit,” a shaken Bhudesh said a day after witnessing the cowardly collision. “He just kept driving. He didn’t even stop.”

“She left three beautiful children behind. I hope they catch this crazy guy,” said Barclay, 34. “She was just crossing the street and this crazy guy took her life away. He just kept going he didn’t care.”

Beria was declared dead at Jamaica Hospital and police were investigating the crash.

The first of the killer accidents happened in Floral Park, Queens, when Sheena Mathew, 38, was struck by a vehicle as she crossed Hillside Ave. mere steps from her home on Little Neck Parkway. The vehicle fled the scene at 5:57 p.m., police said.

Mathew, a nurse at Queens Hospital Center, left behind two children and a husband, Mathew Pappen, according to a friend.

“She came here for a better life from the Middle East,” said Ivy Sakaria, 37, whose eldest child attended Public School 18 with one of Mathew’s kids. “She was very dedicated to her children . . . it was shocking news for us.”