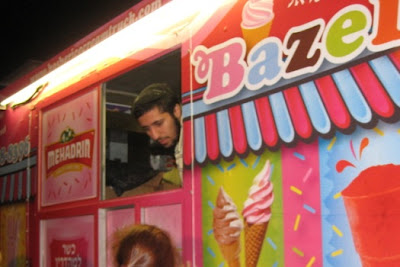 
Joseph Isaacoff, 25, and Binyamin Yitzchakov, 21, of Brooklyn were charged with petty larceny in August after sheriff's deputies say they hopped onto a rival kosher ice cream truck, yelled at their rival and then stole his iPod.

The actual incident took place on a Sunday afternoon July 15 outside the Sun Ranch Bungalow Colony on Fraser Road in the Town of Thompson. Isaacoff and Yitzchakov are in business together.

Levy Habosha, 34, of Brooklyn, runs his own kosher ice cream truck. These are the trucks that jingle music down the street and bring the kids running.

“They are competing for business at all the camps,” Sheriff's Sgt. Ed Clouse said.

Habosha reported to deputies that his rivals came on board and started calling him names. But he has mounted video cameras inside and outside his ice cream truck and the incident was recorded on videotape. Deputies were able to confirm that the two came onboard and took the iPod and threw it out, Clouse said.

Isaacoff and Yitzchakov voluntarily surrendered on Aug. 2 and were booked on the misdemeanor charge.

But ever since, the ice cream war has continued around the camps.


“They are still out there working,” Clouse said. “We get calls once or twice a week that one has looked at the other one funny.”


Times Herald-Record
Posted by joe levin at 7:37 AM