The Scandal Of Hasidic Education 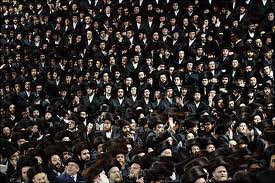 The lore around the American Jewish immigrant story generally goes something like this: “Since at least the 1930s, American Jews, like other ethnic minorities, have taken it for granted that a college or university education is necessary for economic success, social advancement and meaningful civic participation,” as a November 12, 2010 Jewish Week article stated.

While this is true in most parts of the American Jewish community, in the Hassidic and Ultra-Orthodox communities, there is a lack of secular education, which negatively impacts those who choose to enter mainstream America. They face cultural disorientation and isolation, coupled with a lack of practical and marketable skills.

Footsteps, a NYC-based nonprofit, supports those seeking to explore the world beyond the ultra-religious communities in which they were raised. Founded in December 2003, Footsteps has helped over 600 individuals access educational, vocational, and social support, in the belief that all people have the right to education, to earn an income, and to religious freedom.

As executive director, I have the opportunity to meet individuals who undergo this challenging process. Avrum grew up in Borough Park and comes from a Bobov family of 17 children. Avrum always wanted to study psychology and read English literature. However, his family and community discouraged him. At age 19, after returning from a year of study in Israel, he secretly signed up for college instead of going to kollel, hiding it from his family and community. Although he did not have a high school diploma, Avrum was able to sign up for Touro College, and subsequently advanced to another university.

Avrum does not have his family’s support to attend university – he works full days to get by financially and attends school in the evenings. He also receives an academic scholarship from Footsteps. Avrum explains that although he has accomplished a lot, he feels as though he is always going to be catching up and is sure that he’ll “always feel like an outsider.” Yet at Footsteps he can find other people who have gone through similar experiences to support him emotionally as well as practically as he navigates a new world.

Avrum has taken on the issue of access to secular education in Hasidic schools in New York City, sending letters to city and state officials and seeking representation from various legal entities. He says that he would like the schools to follow state laws, which require that all children, including those educated in nonpublic schools or at home, receive the equivalent of an eighth-grade public school education, as stated in the New York State Department of Education Guidelines.

Yet from Avrum’s experience, many of his English studies teachers could barely string together a grammatically correct sentence of English. When government tests were issued, Avrum explains that the teachers read the questions and answer options out loud, reading the correct choice in a louder tone so that students would pass the tests.

Malkie Schwartz, who founded Footsteps after leaving her Lubavitch upbringing in Crown Heights, observes, “I would do whatever I could to avoid being in an Upper West Side living room when a Jewish twelfth-grade student announces to his family that he will not be heading to college as originally planned. At the same time, just a borough away--in Brooklyn--it takes a brave Ultra-Orthodox young adult to walk into their living room and disclose the horrifying reality that he or she will be heading to college.” Schwartz notes that, while not a judgment between these two perspectives, the discrepancy in values leads to economic discrepancies as well.

The lack of secular education poses a significant barrier for those raised Ultra-Orthodox communities wishing to explore life beyond their communities. As an American Jewish community increasingly paying attention to social justice issues inspires us protect those marginalized, we cannot forget to look internally.

Avrum’s name has been changed to protect his identity.
Posted by joe levin at 8:15 PM