Is this America's tsunami? 355 die and thousands of homes are destroyed as 161 tornadoes up to a MILE wide tear through South 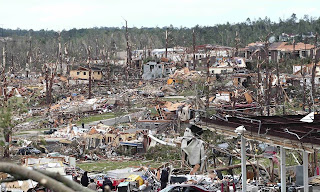 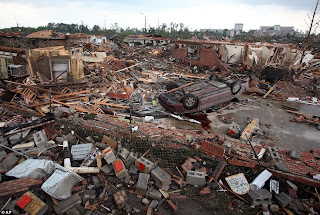 The deadliest storms for 40 years have obliterated large swaths of land from Mississippi to Georgia, killing at least 355 people in six states, wiping out homes and businesses and causing a nuclear power plant to use back-up generators.

The death toll, already staggering, continues to rise almost every few minutes as rescue workers pull bodies from the rubble. There are fears it could rise higher than the death toll recorded in 1974 when 315 people lost their lives in a single day when violent storms rocked several states.

There were reports of more than 160 twisters crashing through the Southern states right up to the Northern states, according to the National Weather Service Storm Prediction Center

There were 162 dead in Alabama alone, the state emergency management agency confirmed. It was the worst hit state that saw an enormous F5-category tornado rip through Birmingham yesterday leaving a path of devastation in its wake.

'We were in the bathroom holding on to each other and holding on to dear life,' said Samantha Nail, who lives in a blue-collar subdivision in the Birmingham suburb of Pleasant Grove.

There the storm slammed heavy pickup trucks into ditches and obliterated tidy brick houses, leaving behind a mess of mattresses, electronics and children's toys scattered across a grassy plain where dozens used to live.

'If it wasn't for our concrete walls, our home would be gone like the rest of them,' she added.

In Alberta, Alabama sirens blared, and people, who had lost everything either sobbed or yelled out for their missing family members.

People covered the bodies of their neighbours with blankets as they lay in the ruins of their destroyed homes.

'I was in the bathroom in my house at 915 Alberta Drive when the tornado hit,' Fred Jackson, 48, told Tuscaloosa News.

'The earth went to moving,' he said. 'Roots were pulling up. Everything was moving. The house is destroyed. We had to get out through a window.

'We're just trying to find cover before the next one hits,' he added.

Businesses in the area were reduced to rubble.

One Steak-Out driver, who moved to the area after Hurricane Katrina devastated New Orleans told Tuscaloosa News: 'It happened too fast to be scared. This is exactly what New Orleans looked like, but on a smaller scale.'

Many are still missing in the neighbourhood and it is feared this is the story across the six states.

Katherine Honnicutt, told the News she was forced to throw a mattress over her bedridden father, who couldn't be moved from his bed as the tornado swept through Alberta.

She had just enough time to to make sure he had an opening so he could breathe before she and other family members dashed to a wardrobe for shelter.

'I lived here for 32 years, and this is the worst I have ever seen,' she said. 'I was standing at the door and saw it coming.'

In Tuscaloosa, a city of more than 83,000 and home to the University of Alabama, a mile-wide twister barrelled through late yesterday afternoon, tossing houses and cars into the air like they were toys. Homes were reduced to fire wood and uprooted trees littered the streets. It looked more like a war zone in the end.

The city's police and other emergency services were devastated, Mayor Walt Maddox said. The storm had, he added, been 'a devastating blow.'

'I don't know how anyone survived,' Maddox told CNN.

'We're used to tornadoes here in Tuscaloosa. It's part of growing up. But when you look at the path of destruction that's likely five to seven miles long in an area half a mile to a mile wide...it's an amazing scene.

There's parts of the city I don't recognise, and that's someone that's lived here his entire life.'

It is thought there could be a million people without power in the state.

By nightfall, the city was dark. Roads were impassable. Signs were blown down in front of restaurants, businesses were unrecognisable and sirens wailed off and on.

Debris littered the streets and sidewalks.

'When I looked back, I just saw trees and stuff coming by,' said Mike Whitt, a resident at DCH Regional Medical Center who ran from the hospital's parking deck when the wind started swirling and he heard a roar.

On Thursday morning, he walked through the neighbourhood next to the hospital, home to a mix of students and townspeople, looking at dozens of homes without roofs.

Household items were scattered all over the ground a drum, running shoes, insulation, towels, and a shampoo bottle. Streets were impassable, the pavement strewn with trees, pieces of houses and cars with their windows blown out.

Dr. David Hinson was working at the hospital when the tornado hit. He and his wife had to walk several blocks to get to their house, which was destroyed.

Several houses down, he helped pull three students from the rubble. One was dead and two were badly injured. He and others used pieces of debris as makeshift stretchers to carry them to an ambulance.

'We just did the best we could to get them out and get them stabilized and get them to help," he said. "I don't know what happened to them.'

Each of the reactors at the plant, 84 miles north of Birmingham, has the capacity to generate more than 1,000 megawatts, according to the U.S. Nuclear Regulatory Commission.

Also in Huntsville, meteorologists at a National Weather Service office were forced to take shelter in a reinforced steel room when they observed multiple wall clouds, which sometimes spawn tornadoes.

Elsewhere, 32 people were killed in Mississippi, 30 in Tennessee another 14 people were reported dead in Georgia, eight in Virginia and one in Kentucky.

Damaging winds and large hail were reported in 21 states from New York to Arkansas, according to the U.S. Storm Prediction Center, which had warned yesterday of a major outbreak of tornadoes.

President Barack Obama said he had spoken with Alabama Gov. Robert Bentley and approved his request for emergency federal assistance, including search and rescue assets. About 1,400 National Guard soldiers were being deployed around the state.