At least 88 protesters killed in deadliest day of Syria unrest 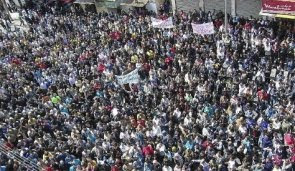 Syrian security forces fire live bullets and tear gas at the tens of thousands of people across the country chanting 'the people want the downfall of the regime.'

At least 88 protesters were killed in demonstrations across Syria on Friday, the highest death toll in a single day since protests against the rule of President Bashar al-Assad erupted last month.

An official in the Syrian human rights organization Sawasiah founded by jailed human rights lawyer Mohannad al-Hassani, told Reuters the killings of civilians occurred the Damascus district of Barzeh, its suburbs Zamalka, Harasta, Douma, Muadamiya, Qaboun and Hajar al-Asswad, as well as in the cities of Hama, Latakia
and Homs, and in the southern town of Izra'a.

Syrian security forces fired live bullets and tear gas at the tens of thousands of people shouting for freedom and democracy.

Most of the protesters were killed in suburbs and towns surrounding Damascus, with several in the central city of Homs and in the southern town of Izra'a, Reuters reported.

A large number of the dead were in the city of Azraa, near Daraa, while at lease seven were killed in the capital of Damascus, an activist requesting anonymity told the German Press Agency DPA.

"Snipers were positioned on buildings and shot at the demonstrators killing 18 people in Azraa, among them a toddler," the activist said, quoting hospital sources in Daraa.

"This regime is committing a massacre against its own people," he said, adding that most of the dead received direct bullets in the head.

"The people want the downfall of the regime!" shouted protesters in Douma, a Damascus suburb where some 40,000 people took to the streets, witnesses said.

It is the same rallying cry that was heard during the revolutions in Egypt and Tunisia.

The White House deplored Assad following the deadly protests and called on the Syrian government to "cease and desist in the use of violence against protesters" and to follow through on promised reforms.

The uprising in Syria has posed the biggest challenge to the 40-year ruling dynasty of Assad and his father before him. Assad has been trying to defuse the protests by launching a bloody crackdown along with a series of concessions, most recently lifting emergency laws that gave authorities almost boundless powers of surveillance and arrest.

But many protesters said the concessions have come too late - and that Assad does not deserve the credit.

"The state of emergency was brought down, not lifted," prominent Syrian activist Suhair Atassi, who was arrested several times in the past, wrote on her Twitter page. "It is a victory as a result of demonstrations, protests and the blood of martyrs who called for Syria's freedom."

At least 200 people have been killed in the government crackdown since the protests erupted, human rights groups say.

Syria stands in the middle of the most volatile conflicts in region because of its alliances with militant groups like Lebanon's Hezbollah and with Shiite powerhouse Iran. That has given Damascus a pivotal role in most of the flashpoint issues of the region, from the Arab-Israeli peace process to Iran's widening influence.
Posted by joe levin at 7:45 PM