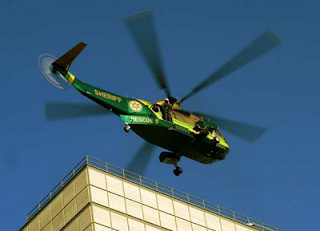 The incidents have occurred in Maywood, La Puente, Pico Rivera, and West Covina. In four of those cases, sheriff's deputies made arrests of suspects between the ages of 15 and 25. And two of the arrests have come this month.

"This a serious matter," said Sgt. Morrie Zager, a helicopter pilot with the Sheriff's Aero Bureau. "The pilots' disorientation could cause loss of control of the aircraft."

A 16-year-old Los Alamitos boy was arrested this week after sheriff's deputies said he pointed a laser into one of their helicopters as it flew above Interstate 5 and Rosemead Boulevard.

The pilot of the aircraft was able to make a safe landing.

The extent of the problem in the Los Angeles area became evident in a report released in January by the Federal Aviation Administration that said Los Angeles International Airport recorded the highest number of incidents in the country last year involving aircraft and laser beams, which can can distract or temporarily blind pilots.

The nation’s third-busiest airport had 102 reported incidents with 201 more at area airports, including 32 at Los Angeles/Ontario International Airport, 32 from John Wayne Airport in Orange County, and 31 at Bob Hope Airport in Burbank, according to the FAA.

The review also found that the number of laser events almost doubled in 2010 from the previous year to more than 2,800 -- the highest number of reports since the federal government began tracking them in 2005.

In California, a conviction for aircraft laser pointing can result in up to three years in state prison and a fine of up to $2,000. Some have been pushing for even harsher penalties.

For their part, sheriff's officials said the first step has been to better document such incidents internally. But they also are coordinating with federal and local agencies to combat the problem through education and enforcement.

"The awareness of law enforcement has been heightened on the ground and in the air," said Sheriff's Capt. Mike Parker. "But we need the public's help to protect everyone's safety."
Posted by joe levin at 6:03 PM