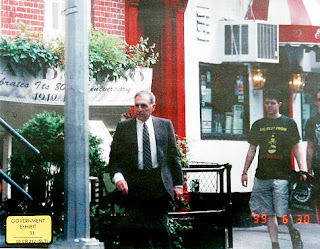 The presumed murder of the son of high-ranking Genovese gangster Dominick (Quiet Dom) Cirillo may have finally been solved - a top mobster says the order to kill him came from the victim's father.

Massino, the highest ranking Mafia rat ever to testify in a New York courtroom was asked by prosecutor Taryn Merkl to explain what Basciano meant.

Authorities have long suspected Nicholas Cirillo was whacked after an altercation in the Bronx with Basciano's son, Vincent Jr., and Bonanno soldier Dominick Cicale.

Two weeks after the clash Nicholas Cirillo, then 41, vanished on Mother's Day 2004. His body has never been found.

Dominick Cirillo, a former acting boss of the Genovese family who earned his nickname because he is low-key and surveillance conscious, refused to cooperate with police.

And he was evasive when questioned by a federal probation officer in 2006 about who was to blame for his troubled son's disappearance, according to court records.

Investigators have previously theorized that the elder Cirillo, who was estranged from his son, approved the murder because assaulting a made member of the Mafia carries the penalty of death. Cicale was already a wiseguy and Basciano's son was up for induction into the mob at the time.

But killing the son of a Mafioso would also be a death sentence. Massino acknowledged that he gave the order to kill Bonanno capo Gerlando (George from Canada) Sciascia - despite his fondness for the gangster - because Sciascia had murdered the son of a made man in Canada.

Massino gestured with his hand like a gun when he asked Basciano: "Do we have anything to do with that [Nicholas Cirillo's murder]?"

"Absolutely not. C'mon," Basciano shot back.

That was apparently good enough for Massino, who noted that a wiseguy could get killed for lying to his boss about a murder.

Basciano told Massino he met with Dominick Cirillo about the beef and the Genovese family "came back and apologized to me."

Cirillo, who is on supervised release for a racketeering conviction, could not be reached for comment.

His daughter Ann Marie Caggiano, refused to come to the door of her waterfront home near the Throgs Neck Bridge yesterday, but spoke over the intercom.

Informed of the testimony, she said: "I really don't want to talk about that."

Yesterday, Bonanno turncoat James (Big Louie) Tartaglione was asked about the ramifications of killing a made man's son: "You're liable to start a war between families," he said.

After Nicholas Cirillo vanished, there was no war.
Posted by joe levin at 11:22 AM