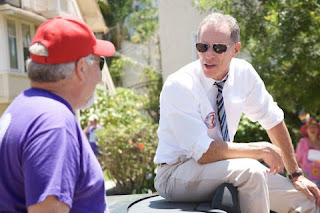 Fred Karger is the openly gay, Jewish Republican presidential candidate that you’ve never heard of. And while he’s certainly not going to change the first four qualifiers after his name, he’s trying to do something about the last.

On April 22, Karger, who officially announced his candidacy on March 23, was campaigning in the Palmetto State and meeting with party officials about getting into the GOP debate set for May 5 in Greenville that’s being organized in part by Fox News.

It’s the first presidential debate in the 2012 cycle.A trim, 61-year-old gay activist from California with round-framed glasses, Karger worked on nine presidential campaigns — three of them successful — as a political consultant. His 2012 White House effort is inspired by the optimism of his former boss Ronald Reagan.

“I had this double life. I was gay,” Karger said while sipping coffee in the lobby of the Sheraton Hotel in Columbia April 22. “Had a pretty healthy gay life on the side. Had a boyfriend. But through work I was completely closeted, and so in Republican politics — and my generation — and with my family and everything I just kept it a secret. I was a pretty good actor. I just got good at juggling like a lot of us did. And then when I retired and I started becoming a gay activist … suddenly I thought of running for office. And, you know, start at the top.”

On April 21 he’d campaigned in Greenville and spoken that evening to a group of about 35 at the University of South Carolina for an LBGT event. The next night he was headed to Charleston to meet with the South Carolina Log Cabin Republicans.

Reached this week, South Carolina Log Cabin Republicans president Truman Smith said the 10- to 15-person event went well and that it’s too early to say who he’ll be supporting in the primary.

“Obviously his candidacy is a long shot — he’d be the first to admit that — but it’s good to have someone in our party talking about these issues from a positive point of view,” Smith says.

In a place not particularly known as a hotbed of social tolerance, Karger might have a high hurdle to clear among GOP voters in this early primary state.

“I grew up in a very different Republican Party,” he says. “I’ve been trying to change things. I’m much more of a centrist. I’m not a social conservative, but I don’t say ‘social conservatives, get out of here if you disagree with me.’”

He’d rather grow the party.

Though he’s not married, Karger wears a wedding band on his right hand that used to belong to his grandfather who died before he was born. He started wearing it as a protest after California’s Proposition 8 decision to outlaw gay marriage. His grandfather, who he’s named after, was a Jewish immigrant and activist 100 years ago. Karger finds it ironic that in 2011 the Jewish community is in better shape than the gay community.

During the 2008 presidential cycle, no GOP candidates excited him, so he ended up maxing out his political contributions to Hillary Clinton. He voted for Ralph Nader as a protest vote.
Earlier this month, Karger got a confidence boost while campaigning in New Hampshire when he came in first place — beating New England native son Mitt Romney — in a College Republicans straw poll.

But the road has been rougher in other parts of the country.

Iowa Christian Alliance President Steve Scheffler refused to invite Karger to his presidential forum in early March, after sending him an email that read, “you and the radical homosexual community are here to harass supporters of REAL marriage … [and] … you stand NO chance here in Iowa.”

Karger says he was also frozen out of February’s Conservative Political Action Conference (CPAC) in Washington, D.C, according to The Atlantic.

The reception in South Carolina is already proving difficult, as he’s had some headaches getting into the May 5 debate.

The South Carolina Republican Party invited him, but he must fulfill requirements set by co-host Fox News. Not only will he have to pay a $25,000 filing fee to the SCGOP, which he says he’d do in a minute, but he must also average 1 percent in at least five national 2012 presidential polls. So far his name hasn’t shown up on any.

“The Republican Party is not enamored with me, I knew that coming in,” Karger tells Free Times. “And the gay establishment is not very excited about me because I’m a Republican.”
Regardless, he’s willing do whatever it takes to get on the stage.

“You have no idea how important this is to my community and for me to get in these debates,” he says. “If I am on that stage, history will be made. Times are changing.”
Posted by joe levin at 11:15 AM