How is an egalitarian yeshiva grappling with premarital sex? 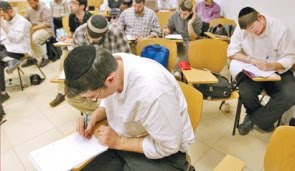 Hadar, America’s first full-time, egalitarian yeshiva, emphasizes a commitment to observing Jewish law while engaging with modern society, including how and when Jews can have sex.

Just weeks before starting his year as a fellow at Yeshivat Hadar, an egalitarian Judaic learning program for adults, Itamar Landau moved in with his girlfriend.

The fellowship demanded that Landau keep kosher and observe the Sabbath. The couple agreed to separate milk and meat in their shared kitchen and to refrain from activities such as driving on Saturdays as they grew accustomed to living together and sharing a bed.

But on the final Friday night of January, Landau slept alone.

He and his girlfriend were both attending Hadar’s annual retreat, and the yeshiva stipulated that unmarried couples were to take separate rooms — regardless of what they did at home.

Hadar, America’s first full-time, egalitarian yeshiva, emphasizes a commitment to observing Jewish law while engaging with modern society, and encourages its fellows to live according to Halacha, or traditional Jewish law. As a result, the yeshiva has articulated clear stances on core practices such as the Sabbath and kashrut.

But the discrepancy between Landau’s personal living arrangements with his girlfriend and his arrangement at the retreat reflects the struggle of Hadar’s faculty and students toward a clear definition of one expansive area of Halacha: how and when Jews can have sex.
Posted by joe levin at 11:38 PM