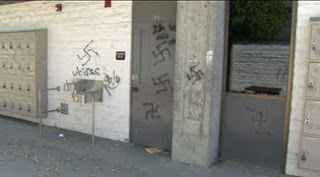 The students have not yet been charged, but they were detained, interviewed and written confessions were obtained, according to the Malibu/Lost Hills Sheriff's Station.

The case will be presented to the L.A. County District Attorney's Office.

The graffiti was found on school property early Saturday morning.

Maintenance workers notified deputies of the vandalism after discovering it when they reported for work, according to a statement written by L.A. County Sheriff's Department Lieutenant David J. Thompson.

When deputies arrived onto the scene, they found that the vandalism was in fact Nazi Swastikas as well as a picture of Hitler and the words "whites only," "gas chamber," and the names "Walker" and "Camacho," reportedly names of teachers, according to the statement.

No one witnessed the incident, but deputies say clues left behind helped lead them to the suspects.

"It's a particularly disgusting time to do it because it's a holy week for many religions," said city of Calabasas mayor James Robert Bozajian. "It's so non-representative of this community that I hope they apprehend the person as soon as possible."
Posted by joe levin at 11:09 AM