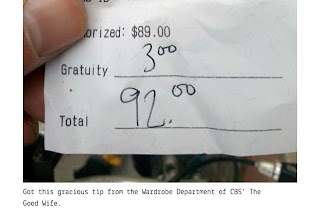 We usually tip 20% and, to be honest, it takes some really atrocious service to get us to go below 15%. But apparently there are a lot of tightfisted skinflints in this town, and one local man is fed up. Larry Fox, a 20 year old designer and developer, has a side job making deliveries for Brooklyn restaurants.

He's not satisfied with some of the gratuities he's received, so he's created the website 15 Percent to shame those who have screwed him and others out of their rightful remuneration. And he's posting the names and addresses of the allegedly lousy tippers, too.

One entry on the site, submitted by a delivery person named "Sam Paul," reads, "No tip [address redacted] last night, in middle of third monsoon of evening. elevator opens, i drip on floor, he laughs at me.

i say 20 dollars, he says here’s 20 dollars." Another goes a little something like, "[Name redacted] at [address redacted] tipped me one dollar to bring him a sandwich during a hail/rain/thunder storm….I hate you [redacted!]"

As you can see, we're not so comfortable publishing the names and addresses of people accused of unsatisfactory tipping. But Fox sure isn't.

He describes his Tumblr site, which launched a few days ago, as "a blog documenting people, and companies who have never seemed to work in the service industry, or don’t think to tip at least 15% on deliveries, and instead opt for 2 dollars on everything. This is for all the people who have been handed $80 on a $78 order and told 'keep the change.' Thanks ass-hole."

Reached by phone, Fox tells us, "I just got tired of all these big companies, these TV shows and movie sets giving us two or three dollar tips on a $90 order.

The excuse is that 'we can't tip because that's what corporate says' is wrong. I find it disrespectful. And I wanted to make people aware of that."

So, fair warning cheap tippers! To be honest, we're just glad Fox's blog wasn't around that time a weed delivery guy (i.e., drug dealer) lectured us for not tipping him anything.
Posted by joe levin at 10:44 PM