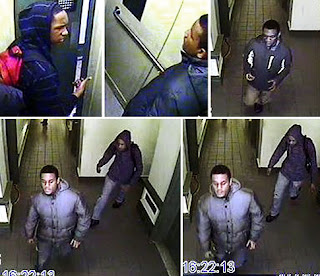 Cops are hunting for four teens who pummeled a Chinese food delivery man and stole his cash in an upper Manhattan apartment building last week.

The four teenagers placed an order with the restaurant about 4:20 p.m. Friday for delivery to the Morningside Ave. building near W. 118th St. in Morningside Heights, police said Tuesday.

Three of the young bandits were caught on surveillance video waiting for the delivery man on the sixth floor of the building.

When the unidentified victim got to the top of the stairs, the teens beat him and took his cash from his pocket, police said.

One of the punks even tossed the bag of food at the worker before the group fled and met the fourth teen, who was acting as their lookout, cops said.

Anyone with information should call the NYPD's Crime Stoppers hotline at (800) 577-TIPS
Posted by joe levin at 1:15 PM