Rabbi's Short Hills neighbors want him to pay up 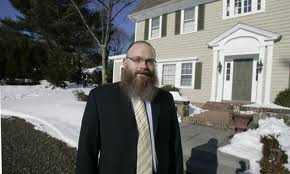 MILLBURN –Members of a local activist group want the township to revoke a 2009 settlement made with a Short Hills rabbi that they say forgave $499,000 in fines for alleged zoning violations and put limits on the size and scope of his religious activities while awaiting zoning approval on a new site.

James Welch and Robert Sanna, Rabbi Mendel Bogomilsky’s Short Hills neighbors and trustees of the Concerned Neighborhood Association of Millburn Township (CNAMT), claim that Bogomilsky is in violation of the settlement agreement. In respect to his current activities in trying to obtain zoning variances for a new shul, they say he has been “abusive” in his treatment of the community and the Zoning Board and is “flouting” the law.

In an April 20 appearance before the Township Committee, Welch and Sanna asked the town’s governing body to revoke the 2009 settlement agreement and require Bogomilsky to pay back the zoning fines that were waived and that “belong to the taxpayers.”

In addition, CNAMT’s lawyers sent a letter to Millburn’s Zoning Board of Adjustment asking that Bogomilsky’s request for a postponement in his current zoning application for a religious center be denied and that the board refuse to grant any further requests for adjournment. Bogomilsky asked for and received an adjournment to May 2 to present revised plans to the board .

When contacted the next day to comment, Bogomilsky, who was not at the April 20 meeting, said that the fines imposed in 2009 totaled $750,000, not $499,000 and that they were “manufactured” by the township and “unenforceable.”

Bogomilsky called CNAMT’s claims “patently ridiculous” and “injurious” and said he was considering making a statement at the next Township Committee session to clarify what he termed the “disinformation” in their statement to the Township Committee.

“It’s misinformation of the worst kind,” Bogomilsky said, adding that it was “inexcusable.”

Bogomilsky said his neighbors have been “vocal” and “misinformed” regarding his current plans to build a 16,350 square-foot religious facility on Jefferson Avenue in Short Hills, adding it was “unfortunate” that the opposition has “taken the low road” in coming out against his plans to build.

Bogomilsky wants to build a house of worship in his Short Hills neighborhood but he needs zoning variances to do so and his neighbors oppose the plan. His revised site plan, which will be presented to the Zoning Board on May 2, will only require one variance instead of the original four that were needed, he said.

Bogomilsky explained that with the new plan the only variance remaining is the one for lot size. The property is 1.8 acres and three acres are needed for a house of worship in a residential neighborhood.
Posted by joe levin at 1:50 AM