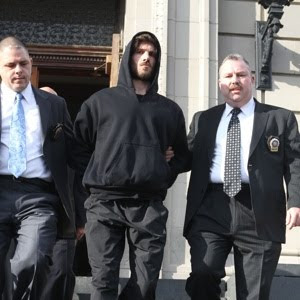 The Staten Island man accused of butchering his parents inside their home and then fleeing to Israel is unfit to stand trial, it was announced today.

Eric Bellucci, 31, was ordered into the custody of high-security state psychiatric facility after two court-appointed psychiatrists determined he doesn’t understand the charges against him and can’t assist in his own defense, state Supreme Court Justice Leonard P. Rienzi ruled this morning.

Bellucci is charged with two counts of murder for the Oct. 13 stabbing death of his parents, Arthur, 61, and Marian, 56, inside their Annadale home.

His bizarre behavior while in police custody has included his refusal to be fingerprinted, not entering the courtroom for scheduled appearances and declining to discuss his case with his attorney.

“We consulted our own psychiatrist and after careful deliberation, agreed not to contest the state’s findings,” said DA Daniel Donovan. “The defendant will undergo comprehensive evaluation and treatment at a secure state facility until such time as he is deemed fit to stand trial and face justice for his brutal crime.”

Prosecutors say he stabbed his parents to death inside their posh Poillon Avenue home and then drove to Newark, where he hopped a flight to Tel Aviv.

He was arrested at Ben Gurion International Airport attempting to buy a ticket for a Turkish Airlines flight to Beijing, with a layover in Istanbul.

Bellucci’s father was a Corcoran real estate executive, and his mother ran a health-care business. They had been expecting their first grandchild when they were killed.

“My heart goes out to the family and friends of Marian and Arthur Bellucci, who continue to suffer from this unspeakable tragedy,” said Donovan.
Posted by joe levin at 5:16 PM