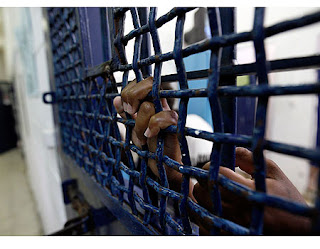 Virginia's prison system did not violate a Muslim inmate's religious rights when it refused to allow him to grow a 1/8-inch (3-millimeter) beard, which he believes is required by his religion, a federal judge has ruled.

William Couch, a 50-year-old Sunni Muslim, is a medium-security prisoner serving multiple life sentences for rape and other convictions. He challenged the Virginia Department of Corrections' grooming policy, which bans long hair and beards.

Department spokesman Larry Traylor declined to comment on the case.

Fogel argued a 1/8-inch beard would be too short to allow Couch to easily change his appearance if he escaped or hide weapons or other contraband, which is why the department argues the policy is needed.

"There is no conceivable security issue for a Muslim, with concededly sincere beliefs, to grow a 1/8-inch beard," Fogel said Monday.
Posted by joe levin at 12:49 PM