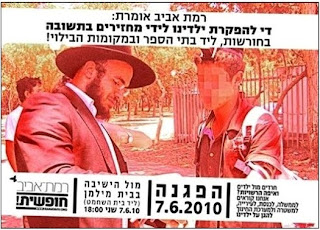 A notice on the bulletin board in the old commercial center of Ramat Aviv suggests holding a Passover seder in the local Habad center. Another recommends an “unprecedented” overall ritual Passover cleansing, including the bathroom, kitchen utensils and electric appliances.

“That says it all,” says Ram Fruman, one of the figureheads of a residents' protest against what they call an organized ultra-Orthodox “invasion” into secular neighborhoods.

In recent months Fruman has established a national forum to preserve the secular way of life in several neighborhoods countrywide where residents feel their very home is threatened.

“I realized early on this wasn't only Ramat Aviv's battle,” says Fruman. “We began to organize groups and people started to contact us. By the end of the year we will be active in 40 or 50 communities.”

Fruman estimates the neighborhood activists represent thousands of people all over the country.

The forum objects to the Habad and Breslau centers that have opened up in secular neighborhoods and are acting to change the communities' way of life. They are also opposed to ultra-Orthodox organizations whose activists go around preaching and persuading people to lead a religious lifestyle.

“It is said secular people only go to war when their own house is in danger and are otherwise indifferent to what's happening in the country,” says Fruman. “But in this case, everyone understands that their local and personal battle is part of something much bigger. Because even if we triumph in one place, the militant group may move on to another neighborhood and succeed there. Unless we deal with it in a comprehensive way we will be lost,” he says.

The Habad center in Ramat Aviv calls its ultra-Orthodox activities “operations” and issues its operatives special instructions, such as the need “to be nice in the course of an operation.”

The forum hopes to raise the secular majority's voice, which its members say has fallen silent until the danger reached people's doorstep. Meanwhile, they are discussing their local “battle plans” together, using military terms like “war” and the need to “defend themselves.”

“We're fighting an organized process, so we will have to face it with our own organized moves,” says attorney Meital Yitzhaki-Toledano, of Kfar Yona.

“We feel they see this [process] as an occupation and we're still at the stage in which each one is fighting for his home, so it's early days yet to tell where the neighborhood forum is going,” says Yitzhaki-Toledano.

Fruman denies the suggestions that the forum is anti-religious or racist. “There is no such thing as an ultra-Orthodox race,” he says.

With regards to complaints that Ramot Hashavim people refused to rent apartments to Breslau hasids, Aliza Barkan says: “I wouldn't want to rent an apartment to someone who is doing something illegal. I think what they do is illegal. They're operating a synagogue illegally.”

Forum members balk at attempts to compare them with the Safed rabbis, who called on people not to rent apartments to Arabs and with far-right groups' inciting against refugees and foreign workers in other places.

“It is not a religious struggle,” says Avi Eldar of Ramat Hasharon. “It's a fight against an attempt to impose ways that are opposed to our way of life. We would fight in the same way against the intention to open discotheques in quiet neighborhoods. Ramat Hasharon residents organized a campaign against a noisy supermarket that was open 24 hours a day; why shouldn't they do so against an illegal yeshiva?”

“The ultra-Orthodox groups have a clear agenda - to change our way of life,” concludes Fruman. “Religious people have a right to maintain a religious lifestyle and we have a right to be secular. We're proud of it and we'd like to be good neighbors with the religious people, but we feel they want to change our way of life.”
Posted by joe levin at 8:09 PM