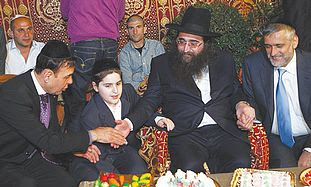 Assad’s envoy in US conveys invite to Yeoshiau Pinto via US Jewish leader; Pinto's forefather was 17th-century Damascus rabbi.

With highly improbable timing, even as it guns down its own people while attempting to retain power, the Syrian government has invited an Israeli rabbi to visit the country where many of his forefathers are buried, and to pray at their Damascus gravesites.

Over the course of Mimouna celebrations at Moshav Gimzo, between Lod and Modi’in, last week, Jack Avital, the visiting head of the Brooklyn-based Sephardic National Alliance, told Rabbi Yeoshiau Pinto that the Syrian ambassador to the US, Imad Moustapha, had asked him to invite the rabbi to Syria.

One of Pinto’s forefathers, after whom he was named, was the rabbi of the Jewish community of Damascus in the first half of the 17th century.

Avital, one of the leaders of the Syrian-Jewish community of North America, has maintained good relations with President Bashar Assad and with Syrian officials in the US, and even headed small delegations of American Jews to Syriafor official visits in 2004 and 2006. A year ago, Avital told Pinto of his visits to Syria and suggested the rabbi visit there as well.

Pinto asked Avital to explore the possibility. An opportunity to do so arose at the wedding of Avidat’s daughter four months ago, attended by both Moustapha and the Syrian ambassador to the UN, Bashar Ja’afari, following which Avital spoke with the two diplomats.

They extended an official invitation to Pinto and ensured that he would have all the necessary security arrangements in place. Preliminary preparations began, including bringing glattkosher food from Turkey for the rabbi’s tentative visit to Syria.

Last week, Pinto asked Avital about the condition of the very small Jewish community in Syria. Avital replied that not only was it doing well, but it backs Assad, and believes that he is the best possible leader for them. Avital, who shares that sentiment, also told Pinto that the earlier invitation to visit Syria was still on.

Attending Pinto’s Mimouna celebration that night at Moshav Gimzo were also the high concentration of cabinet ministers, other politicians, senior officers, businessmen and media people, which by now has become the norm in events related to the rabbi, who has drawn around him a powerful court of influential people seeking his proximity and advice in Israel and the US, between which he divides his time.

The Syrian Embassy in Washington did not respond to The Jerusalem Post’s queries on the planned visit. A spokesman for Pinto said that the rabbi would take the trip – along with Avital – once the situation in Syria calmed down.
Posted by joe levin at 10:49 PM