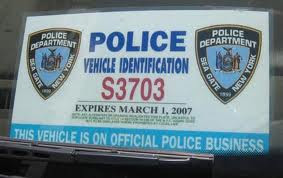 As many as one in four parking placards currently used by motorists in New York City are fake, according to a new study by transportation advocates, and city lawmakers are latching onto the report to push for tougher enforcements.

Currently, there are 78,000 valid parking placards distributed by various authorities in the city. The president of Transportation Alternatives, Paul Steeley White, said his group suveyed six neighborhoods, and out of 1,450 permits found, 343 were fake. “That means that between 10,000 and 25,000 fake permits are used regularly in the city,” White said.

That’s more than the 12,000 yellow taxi cabs currently on the road here, he noted.

“More often than not these placards are getting a free pass,” said City Councilman Dan Garodnick, who joined White and others on the City Hall steps to announce the findings. “We can assume that is because parking permits denote a level of prestige and privilege and many traffic agents want to risk running up against someone in power even if they are parked at a fire hydrant or on a sidewalk.”

Garodnick introduced the Authentic Permit Act to the City Council in early February, calling for a barcode to be added to all legitimate permits so that parking enforcement agents can scan each permit to see if it is both real and being used by the registered car.

Garodnick’s bill, which has 21 co-sponsors, was introduced nearly three months ago, but he said that he has spoken with Jimmy Vacca, the chair of the Council’s Transportation Committee, and Vacca reportedly “expressed an interest in the bill and a desire to hold a hearing on it.” While no hearing date is set, supporters hope it will come in the next few months.
Posted by joe levin at 6:04 PM