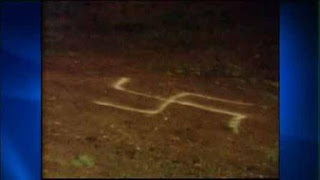 Four young men are in custody on Long Island, after a bizarre attack on a family’s home in Suffolk County.

The message of hate was loud and clear, multiple swastikas, and profanity, was plastered on a Rocky Point home.

Marciano says this is no case of bias.

It’s the latest round of an escalating war against his neighbor’s son.

It may be hard to imagine images much more hateful than these.

But believe it or not, police say this is not a hate crime.

In the state of New York, police have to be able to determine the victim was targeted specifically for his religion.

This afternoon, the Marciano’s started to clean up the mess, as shadowy figures watched from the windows across the street, where no one came to the door to tell Eyewitness News their side.

Now, police are trying to determine how to charge the teens.
Posted by joe levin at 5:23 PM