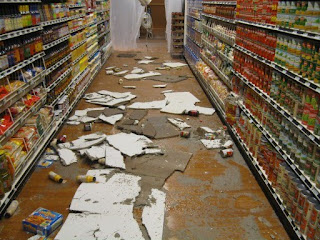 Queens, NY - The highly anticipated opening of the newly renovated Seasons flagship kosher supermarket in Kew Gardens Hills has been postponed, following a criminal act on the seventh day of Pesach that destroyed both the inventory and much of the actual store.

Security cameras caught two unidentified men climbing a ladder onto the roof of the Main Street store at 5 AM on Monday morning. After removing vent covers from the roof, the men poured flammable liquid into the vents which they then ignited. In store sprinklers went off in response to the fire, dousing both the fire and the entire store for the entire day. An alert passerby noticed water pouring out of the store after Maariv Monday night and called 911.

“The sprinklers ran for approximately fifteen hours resulting in over half a million dollars worth of damage to the store,” said general manager Mayer Gold. “At first we thought maybe it was a broken pipe or a water main, but we were able to see exactly what happened thanks to the security cameras.”

ment:Today instead of being filled with bustling customers restocking their pantries with chometz, Seasons is filled with arson investigators and crews from the insurance company who are both hard at work investigating the crime and repairing the damage to the store. Seaseons management hopes to know soon when the new grand opening will take place.

The fire was set at the Seasons Kosher Supermarket, located at 68-18 Main Street, over the second days of Pesach. The video footage shows the arsonists on the roof of the building, cutting into the exhaust system, where the fire was set. The in-house sprinkler system extinguished the fire right away, and the fact that the store was closed over Yom Tov, the FDNY was first called after a pedestrian walking past noticed water streaming out from under the store entrance into the street. By that time, there had already been serious water damage to the store which was all prepared for the grand opening.
Posted by joe levin at 6:00 PM