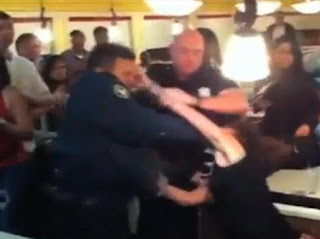 The Atlanta Police Department has launched an internal investigation after a shocking video surfaced showing a cop slugging a woman in the face during a late-night scuffle at an IHOP.

In the video, reportedly shot at 4 a.m. on Sunday at one of the pancake chain's restaurants in the Buckhead neighborhood, two cops confront a young woman in a booth.

As one of the officers tries to yank the woman out of her seat, a girlfriend grabs the officer's shoulder, prompting him to swat her away with a smack to the face.

The woman then flies into a rage, swinging wildly at the officer's head. The officer ducks and then counters with a hard right cross to the woman's jaw.

Amazingly, the petite brunette says on her feet, and the two officers wrestle her to the ground, before cuffing her and hauling her away in front of dozens of stunned diners.

Roberte Caban, who said she was the woman cops were trying to drag out of the booth, told Atlanta's WSBTV television that she and her girlfriends were having coffee when an officer told them to keep it down.

"I felt so bad for her," Caban said. "It was very obvious that the first officer had contained her. We knew Cynthia didn't do anything. We didn't know who he was, he didn't say who he was."

Caban said she was also arrested and that she and her friend spent more than a day in jail.

Cops said they were investigating the incident.

"The matter has been referred to our Office of Professional Standards to determine whether department policies and procedures were followed. Further comment at this time would not be appropriate," the Atlanta Police Department said in a statement.

IHOPs around the country have been plagued by violence this year.

Also on Sunday, Los Angeles Lakers forward Derrick Caracter was arrested after allegedly hitting a waitress at an IHOP in New Orleans. The team was in town for a playoff game.

In February, a group of reporters were attacked in an IHOP parking lot after approaching relatives of a 27-year-old man who had recently been shot to death.

In January, three people were charged with disorderly conduct after a huge brawl at an IHOP in South Carolina. That incident was also caught on video.
Posted by joe levin at 1:10 PM