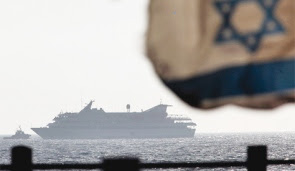 Israel's ambassador to UN warns the organization not to allow new flotilla, planned for May, to launch; U.S., Germany also call on flotilla organizers to find other ways to deliver aid to Gaza.

Israel warned the United Nations Security Council on Thursday not to allow a new flotilla to sail to Gaza, saying that the flotilla organizers had "ties to Hamas and other terrorist organizations."

Another flotilla to Gaza is being planned for May, one year after Israel's deadly raid on the aid flotilla that sailed from Turkey. The new flotilla being planned is larger than the last one, with 15 ships that will transport over 1,000 people in an attempt to break Israel's naval blockade on the Strip.

While speaking to the UN on Thursday, Israel's UN Ambassador Meron Reuben said, "Numerous participants engaged in the planning of this flotilla have made very troubling statements expressing their willingness to become martyrs in this effort," Reuben said.

Flotilla organizers aim at "political provocation and not to advance any humanitarian goal," Reuben said.

He said Israel is determined to enforce the naval blockade of Gaza and "stop additional terrorists from infiltrating the area."

The United States supported Reuben's statement, with U.S. Ambassador Susan Rice saying "There are distinct mechanisms to deliver goods to Gaza and there are no justifications to sail directly to Gaza."

Germany's Ambassador Peter Witting expressed similar sentiment at the meeting, warning that the flotilla has the potential for escalating tensions in the region.

"We call on the organizations involved to find other ways to deliver aid to the people of Gaza," Wittig said.

The United Nations last year opposed the purposes of the flotilla, saying that humanitarian assistance should follow an agreed mechanism to deliver aid to the intended people.
Posted by joe levin at 5:50 PM