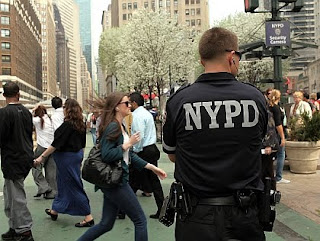 NEW YORK – Police are the lookout this Easter Sunday for any suspicious activity related to what has become known as “Gang Initiation Day.”

“This is a very serious issue,” Sen. Eric Adams said. “You don’t want the public to surrender to the threat of violence.”

Last year on Easter Sunday, Times Square was filled with violence. Four people were shot and 54 people were arrested.

A similar incident happened in 2007 outside a New Rochelle movie theater where dozens were arrested. In both cases, police said gangs were to blame.

Adams, who was a New York Police Department captain, said the gang members are using Twitter to communicate.

“They use it to carry out flash meeting points faster than the NYPD could use their radios,” Adams said.

Still, the NYPD will monitor everything with a closer eye.

“The police department is well abreast of this type of initiation,” Adams said. “If they see something, they say something.”
Posted by joe levin at 6:07 PM