This is the gun police said was brought to P.S. 107 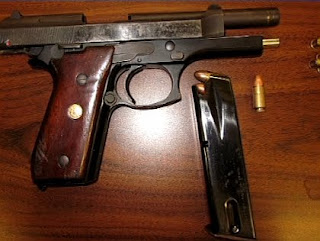 NEW YORK — The father of an 8-year-old boy was facing criminal charges Friday, after his son allegedly brought a loaded gun to school in Queens and sold it to a classmate, Jay Dow reports.

Authorities said the 9mm pistol was brought back to P.S. 107 in Flushing by the third grader who told his mother he paid three dollars for what he thought was a toy.

Police were called and officers arrested 54-year-old Ignacio Galvan who told them he bought the gun years ago for protection.

He’s charged with criminal possession of a weapon and endangering the welfare of a child. His 8-year-old son was facing juvenile charges
Posted by joe levin at 9:13 AM