Mother and daughter stabbed to death in Brooklyn apartment

Police investigate the scene of a double murder that left a mother and a daughter stabbed to death in an East 13th st in Sheepshead Bay. 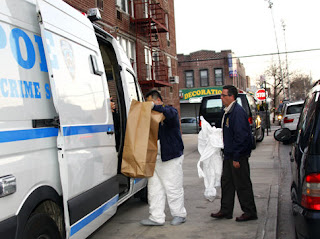 A daughter and mother have been found brutally stabbed to death in a Brooklyn apartment, cops said Monday.

Cops found the 27-year-old woman and her 56-year-old mom late Sunday after going to the Sheepshead Bay apartment to investigate a missing person report.

The call had come from someone who was supposed to meet the younger woman Sunday evening - and grew concerned when she didn't show up, sources said.

One of the victims was found near the front door, and the other in a bedroom.

Both had been stabbed repeatedly on their faces and bodies, police said.

There was no sign of forced entry and no arrests have been made, cops said
Posted by joe levin at 9:57 AM