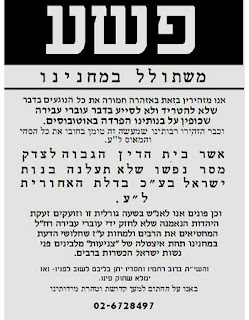 Following a High Court ruling that sex segregation must not be imposed on public transportation, the battle against "strictly kosher" bus lines is now using the weapon most identified with the ultra-Orthodox public – pashkevils.

Some 15 activists of the Israel Movement for Progressive Judaism and the Israel Religious Action Center last week got on "kosher" buses in haredi neighborhoods, dressed in white, and handed out leaflets explaining the High Court ruling on the matter.

The leaflets were worded like pashkevils – posters hung on public walls in haredi locations – and included phrases and expressions like "a crime raging in our camp" and "a serious warning".

Moti Bavchuk, the Movement for Progressive Judaism's coordinator, said the passersby studied the leaflets, as they mistook them for haredi pashkevils, but immediately renounced the issue.

In some cases, he said, an argument broke out between the activists and the bus passengers, although it was mostly dignified and to the point.

"We had two goals: The first, to clarify that the segregation is not voluntary. The harassment and violence against women are forbidden as far as the High Court is concerned, and could lead to criminal sanctions. And the second, to warn against a segregated state which is developing here, kind of like Tehran," said Bavchuk.

A High Court ruling delivered about three months ago – which permits the operation of "kosher lines", in which women are separated from men, under increased supervision and with consent – has led to a significant rise in the number of segregation bus lines.

After the ruling, the haredi side has also realized that the battle over the "kosher" bus lines has moved to the PR level. Ads published in the sector's newspapers and neighborhoods in recent months include statement made by senior rabbis about the importance of separating between men and women on public transportation.

Despite the High Court's demand that haredi newspapers publish ads warning of discrimination against women on the "kosher" bus lines, the sector's three most important papers have refused to do so.
Posted by joe levin at 2:19 AM