Op-Ed: In Defense of the Kidney Salesman 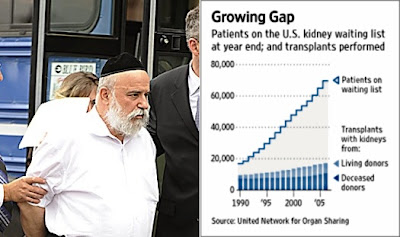 It was with great sadness that I read the case of Levy Izhak Rosenbaum and his recent guilty plea in a federal court to having brokered three [illegal] kidney transplants in exchange for payment of money. The slew of negative comments on the news websites made him seem like he is a second coming of Levy Aron. I can’t comment on the character of Mr. Rosenbaum, for I’ve never met the man. Still, I’d like to warn all of you; not so fast!

On February 25, 1990, Terri Schiavo collapsed in her Florida home in full cardiac arrest. She suffered massive brain damage due to lack of oxygen and, after two and a half months in a coma, her diagnosis was elevated to vegetative state. In 1998 Schiavo's husband, Michael (who had by then forged a new relationship…), petitioned the court to remove her feeding tube. He was opposed by Terri's parents, Robert and Mary Schindler, who argued that she was worth saving even though she didn’t have the capacity to indicate so herself due to her deteriorated state. On February 25, 2005, a judge ordered the removal of Terri Schiavo's feeding tube. Several appeals and federal government interventions followed, including U.S. President George W. Bush returning to Washington D.C. to sign legislation designed to keep her alive. After all attempts at appeals upheld the original decision to remove the feeding tube, staff at the hospice facility where Terri was being cared for disconnected the feeding tube on March 18, 2005 and she died on March 31.

104,748 U.S. patients are currently waiting for an organ transplant; more than 4,000 new patients are added to the waiting list each month. Every day, 13 people die while waiting for a kidney transplant. Because of the lack of available donors in this country, 4,573 kidney failure patients died in 2008 while waiting for life-saving organ transplants. Is it unfathomable that if consenting adults are allowed to agree to exchange one of their kidneys for payment, then there would be no existence of American people dying on a kidney waiting list? Is it in the spirit of ‘the land of the free’ to deprive people (adults) of engaging in their own decision making? We can export jobs of Americans to China, yet importing kidneys of [consenting adult] foreigners to America TO SAVE LIVES is a crime??!!

I would argue that there is little difference between Terri Schiavo and patients with kidney disease. Terri Schiavo was deprived by the government of food, and kidney disease patients are being deprived by the government of viable kidney transplant options. Food and a healthy kidney (a single kidney is more than enough to power the body, assuming that the hospital has qualified the potential donor as physically eligible to donate) are both vital to the life of a human being. The dissimilarity is that kidney patients are NOT vegetables, and a new kidney can easily restore them to a normal life, yet the government is depriving them! More so, being that they are NOT in a comatose state, they can easily indicate as to whether they want to be given a new lease on life through the purchase of a kidney.

I am not a rov and cannot say what is Daas Torah, but (having done lots of research on it as I’ve myself donated a kidney altruistically to a stranger through a wonderful organization called Renewal) I’ve yet to meet a rov who forbids kidney donation; on the contrary, they usually praise it. If so, can it be that it should be halachically forbidden merely for the capitalist element of it (the exchange of money)?

Before jumping on the train of blasting Mr. Rosenbaum merely because it doesn’t feeeeeeeeel right, perhaps we should ponder the ethics of closing avenues of salvation to the myriads suffering with this terrible disease. More importantly, the government should rethink their policies on this matter. Something tells me if a suffering US Senator had to wait in line like everybody else [for a cadaver kidney], the avenue of living donors who are financially compensated would hastily be made legal.
Posted by joe levin at 7:13 PM