"She is Kosher " Oprah Winfrey Went To The Mikvah 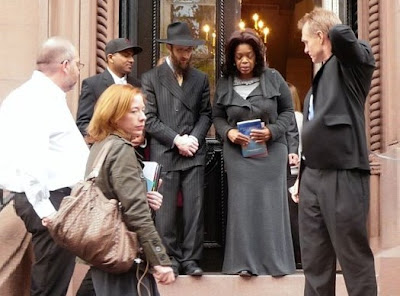 “She just wanted to see it and had the women give her a tour and explain the details of how it works,” he said of her Wednesday visit.

Raskin said Winfrey’s camp contacted the synagogue a few weeks ago to ask about visiting the mikvah.

The rabbi said he didn’t need much convincing to open the synagogue’s doors to Winfrey’s cameras.

“She did have security,” Raskin said, “And therefore, any room she was in, nobody was allowed to go into besides those who were doing the interview.”

Raskin said that during his own chat with her, their discussion naturally turned to religion.

“She told me that she tries to be a channel to do God’s will in the world,” the rabbi said.

In addition to the mikvah, Winfrey visited neighborhoods in Crown Heights and Borough Park to learn more about the daily life of Hasidic Jews, reported the Jewish news site chabad.org.

She sat down with two Hasidic families, ate a traditional meal and talked about community affairs with five local women, the site said.

In the new TV series, Winfrey searches for interesting stories and reports on them.
Posted by joe levin at 8:27 AM