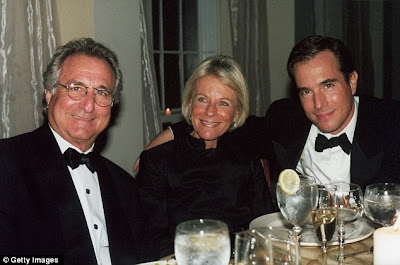 In the only interview Ruth Madoff has given about her husband's crimes, she tells Morley Safer she and Bernard were so distraught over the burden of those crimes that they attempted suicide together. Safer also speaks to Madoff's son, Andrew, for a story that will provide the first inside account from the immediate family of the man who stole billions of dollars. The report will air on "60 Minutes," Sunday, Oct. 30 at 7 p.m. ET/PT.

"I don't know whose idea it was, but we decided to kill ourselves because it was so horrendous what was happening," Ruth Madoff tells Safer. "We had terrible phone calls. Hate mail, just beyond anything and I said '...I just can't go on anymore.'"

So Ruth and Bernard Madoff took a bunch of pills, some of them Ambien and possibly some Klonopin, Ruth recalls. She did not drink alcohol with them for fear of vomiting. "I took what we had, he took more," says Ruth. It was Christmas Eve, she says, "That added to the whole depression." But the pills didn't work. "We took pills and woke up the next day....It was very impulsive and I am glad we woke up," she says.

Some forethought went into the decision, however, because Ruth sent a package to their son Andrew, breaching a court order before making the suicide pact. In the package were sentimental items, including jewelry. Three years later, Andrew asked his mother why she had sent him the jewelry. "And she told me that she and my father had planned to kill themselves...they put that package together beforehand and sent it out," he tells Safer.

Sunday's story will contain many previously undisclosed revelations about the family in the aftermath of the scandal. Viewers will hear for the first time how and where Bernard Madoff confessed his crimes to his loved ones, their reaction and the subsequent family strife of the past three years.