Eli Weinstein being arrsted last year by the FBI 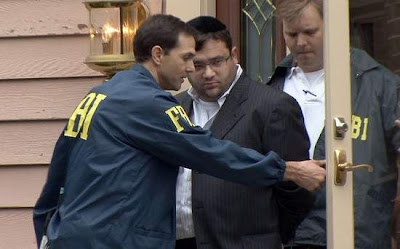 “According to the Indictment, Weinstein’s exploitation of investors’ trust was so shameless he used doctored documents for properties he didn’t own – including in a town that doesn’t exist – and continued to commit crimes while out on bail,” said U.S. Attorney Fishman.

“With promises of sound investments and charitable donations, he allegedly stole $200million, spending freely on fancy cars, jewelry and gambling trips. And in using victims’ money to

collect Judaica, Weinstein robbed from his own community’s present to stockpile artifacts of its past.”

According to the Indictment and other documents filed in Newark federal court:

From at least as early as June 2004 through August 2011, Weinstein, with the help of Siforov and others, orchestrated a real estate investment fraud scheme out of Lakewood that has resulted in losses to victim investors of at least $200 million.

To induce victims to invest, Weinstein and others made various types of materially false and misleading statements and omissions. For example, Weinstein and others represented tovictims that Weinstein’s inside access to certain real estate opportunities allowed him to buy particular properties at below-market prices.

Weinstein bolstered his lies by creating, and causing to be created, various types of fraudulent documents, including “show checks,” which Weinstein led victims to believe represented Weinstein’s investments in specific transactions but were never deposited; forged checks, which had actually been negotiated for small amounts, but Weinstein altered to appear worth millions of dollars; operating agreements, which showed that victims had ownership interests in specific properties they did not; and various kinds of forged legal documents, including leases, mortgages, and deeds.

Weinstein initially targeted victims from the Orthodox Jewish community, of which he was a member, exploiting his standing in and knowledge of the customs and practices

By 2010, Weinstein had tarnished his reputation in the community due to the massive losses caused by the scheme. In April 2010, Weinstein and others began soliciting
victims from outside of the Orthodox Jewish community, whom they defrauded out of millions of dollars.

Weinstein then took significant portions of his victims’ money, which had been provided for specific real estate transactions, and used it for other purposes he did not disclose to victims.

These included funding unrelated real estate transactions in which Weinstein was engaged; paying prior victims; and making charitable and religious contributions which he used to elevate his reputation within the Orthodox Jewish community.

Weinstein faces a maximum potential penalty of 30 years in prison per count.