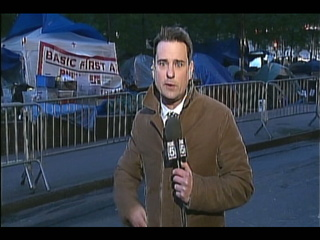 A protester, angered by the presence of a news crew inside Zuccotti Park Friday morning, threatened to stab Fox 5 News reporter John Huddy.

What has been an otherwise violence-free period during his six weeks covering the Occupy Wall Street movement, took a turn for John Huddy. He explained what happened during Good Day New York:

This is somebody I've come across several times for the last few days. He threatened to stab me in the throat with a pen. He ripped the mic out of my hand," said Huddy.

I have a meeting with Bloomberg," said the incoherent protester. The man was soon arrested by the NYPD.

Huddy had gone into the park to find out what protesters were doing to fight the significant drop in temperatures.

I don't think this person represents the whole. One of the media representatives asked me not to categorize this one person as representative of the whole group. Most of the folks I've dealt with have been accomodating. There is an element here that we've seen that has caused problems. Overall, it has been peaceful in the park," added Huddy