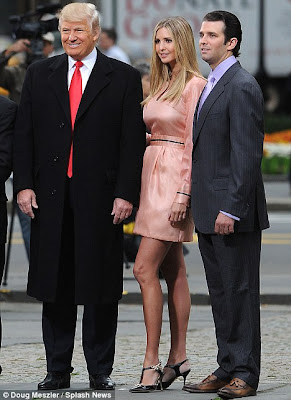 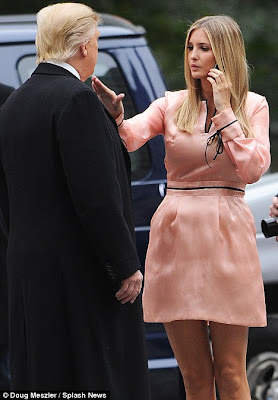 To the fresh lambs to the slaughter in Donald Trump's new series of The Celebrity Apprentice, the business mogul must seem daunting.

After all, the irascible 65-year-old is soon to destroy some of her their dreams, shredding a few egos while he does it, on live television.

But to right hand woman and daughter Ivanka, 30 , Trump is obviously just a teddy bear, as today, she was spotted gently brushing flecks from her father's overcoat before cameras rolled in Manhattan

The blonde mother of baby Arabella, who celebrated her second wedding anniversary to Jared Kushner, 30 , yesterday, was a vision as she prepared the clan's patriarch for his scene.

Then she could be seen lined up with her father and her brother, Donald Jnr, 34 , presumably to great the contestants.

Both Donald's eldest children are integral to his NBC show, and the family were on sharp sartorial form today.

Former model Ivanka looked stunning in a pale pin silk dress with kitten heels, while Donald mirrored his father's colourful tie - but opted for lavender rather than red, which tied in with his sister's dress.