What Women's Media Needs to Know About Chassidic Women 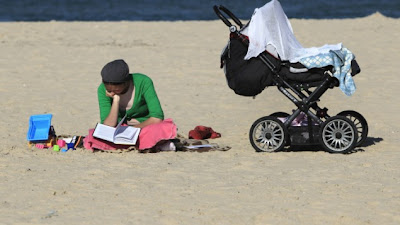 
In the past few days, I've been reading the backlash against "the asifa," a recent mass meeting of religious Jewish men meant to draw a few boundaries around Internet use in our homes (meaning religious Jewish homes; not your house).

Whenever religious Jews make a stink about some cultural issue, the media moves in on it with a bizarre kind of vengeance. Like yesterday, Katie J.M. Baker published an article on Jezebel about the event, in which she actually compared Jewish men to ants!

See: "While men in traditional Orthodox garb filed into Citi Field as steadily as a never-ending line of ants approaching an anthill…" Um, where have I seen Jews compard to insects before? Oh, wait, WWII.

As a resident of Brooklyn, the epicenter of all things hipster and the home of many, many clad-in-black religious Jews, I'd like to clarify a few things for all of you. Here are a few things you need to know about Chassidic women:

1. We are not imprisoned.

The last time I checked (which was right now), I am free to do whatever I want to do. Nobody is making me do anything. If I want to leave the community I live in, whether to go grocery shopping or to put on a pair of pants and go to a disco and snort coke, I can. Nobody is going to stop me. Would I wear a pair of skinny jeans and snort coke in a disco? No. Why?

2. We like ourselves the way we are. And most of us are happy.

Poor Deborah Feldman got the short end of the stick. She got a dysfunctional family and a crummy school. But listen: That happens everywhere. How many (non-Jewish or secular Jewish) friends of yours come from dysfunctional families and crappy schools and just couldn't wait to leave home? Did they represent your entire hometown?

We call becoming lax in religious observance and adopting a secular lifestyle "frying out." People fry out all the time. Most of us, though, feel like we are leading pretty rewarding lives.

3. We find our husbands attractive.

You know those guys with the long beards and the black coats who are always reading something in Hebrew on the train and you're kind of freaked out by them? So they're our husbands.

My husband has a very impressive beard. He wears a black suit, and a kippah and a black hat. He is also the most handsome, hot, attractive man in the entire world to me. Nobody forced me to marry him. My father did not trade me to him for a flock of sheep.

Fun fact: Jewish law prohibits marrying someone who you're not attracted to. Another fun fact: In the Jewish marriage contract, one of the conditions of marriage is that a husband is obligated to sexually satisfy his wife. If my husband would deny "conjugal rights" to me, that's grounds for divorce. Pretty effing progressive if you ask me.

4. We have been happily shagging for millennia. Jews never had the concept of "original sin."

Judaism is the original sex-positive culture. What? You heard me right. Y'all need "sex-positive Third wave feminism" to help you feel like having sex is OK. Jews bypassed the whole Christian idea that all sex, even in marriage, is a sin. And Protestant asceticism just never happened for us.

G-d likes it when a married Jewish couple has sex. Jews never got a message that sex is dirty. We think sex is good. It is so good that having it is actually a commandment. No, we cannot shag "anything that moves." No, we can't sleep around or have sex outside of marriage. But once you're married, sex is totally cool and awesome and G-d likes it.

5. Mikveh is awesome. We don't go to the mikveh because we're "dirty."


Holy moly! How many times have I heard feminists totally misread the Jewish practice of abstaining from sex during one's period and then immersing in a mikveh (a ritual bath)? It is hard to explain this one to people who grew up in Puritan America.

When you hear the word "impure," it has a totally different meaning than the meaning it has in the context of Torah. In Torah, you're dealing with states of being that are related to the service in the Beis HaMikdash (the Great Temple). It's called "ritual purity" and "ritual impurity." These states of being have nothing to do with being dirty or clean. You could, in fact, not shower for days and roll in the mud and you'd still be "ritually pure."

Are you confused? You should be. We think about these things in a paradigm that is so not the dominant paradigm.

All you need to know is that the practice of not touching your husband when you're on your period and then immersing in a mikveh is awesome. Most women's mikvehs are like spas. Picture the most beautiful spa you've ever been to, in a quiet all-girls safe space, and that's mikveh.

Incidentally, Orthodox Jewish women have one of the lowest rates of cervical and other reproductive cancers because of…wait for it…these customs. We do not have sex at times that our vaginas are vulnerable to infection (such as right after birth). Because we do internal checks for menstrual blood the week after we finish menstruating, the rate of early detection of (G-d forbid) tumors and cysts in the vagina is very high.

You think we are sexually repressed and afraid of our own bodies just because we dress modestly? Every single Chassidic woman you see sticks her own fingers in her own vagina at least twice a day for 7 days of the month. The chicks in my women's studies classes didn't even do that.

When you slam Orthodox Jews because you think you're defending or somehow liberating the women of our communities, you're actually doing us a huge disservice. When you slam Jewish men, you're slamming us, too. Not in my name, gals.


The next time you see a Jewish lady in a wig pushing a baby carriage through Brooklyn, I hope you won't see an imprisoned waif who is just waiting to be liberated. Cuz we're not like that. We're strong. We're invincible. And we make delicious kugel. L'chaim, chicas!