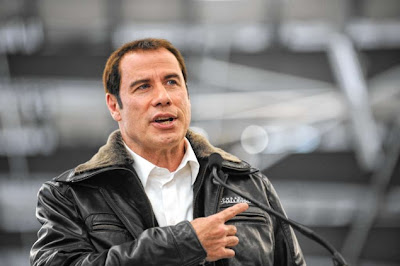 John Travolta's legal team offered $125,000 last week to muzzle one of the masseurs who accused the actor of sexual battery, a source told the Daily News.

The “Pulp Fiction” star’s camp allegedly floated the six-figure sum to Atlanta-based massage therapist John Truesdale to withdraw his federal lawsuit. And, according to the source close to Truesdale, Team Travolta wanted the accuser to keep his trap shut.

The lawyer has repeatedly denied Truesdale’s allegations, calling them “ridiculous.” He said in a statement last week that Travolta’s accusers wouldn’t be getting a red cent.

“Not one penny has been paid nor do we have any intention to pay any money for these ridiculous and false claims,” Singer said in the statement.


Okorocha declined comment on the alleged settlement. He and Allred have been at each other’s throats since he accused her of poaching Truesdale. She denied the accusation, calling Okorocha’s claims “outrageous and defamatory.”

Truesdale withdrew the $2 million federal lawsuit against Travolta on Thursday. He also couldn’t be reached for comment on the reported settlement offer. The News was the first to identify the 250-pound masseur who filed the suit anonymously on May 8 — known then as John Doe No. 2.


The 40-year-old former high school football player claimed in court papers that Travolta groped him, grabbed him between his legs and pleasured himself in his presence during a private massage on Jan. 28. The 6-footer claimed Travolta accosted him in a 15th-floor suite at the Mandarin Oriental Hotel. At the time of the incident, the hotel was called the Mansion of Peachtree.


Truesdale’s claims against Travolta were linked to a similar lawsuit filed by a different masseur who claimed the actor touched him in the Beverly Hills Hotel on Jan. 16. That accuser — known as John Doe No. 1 — also withdrew his federal lawsuit last week and retained Allred.

Witness accounts, flight records and photos placed Travolta almost 3,000 miles away in New York at the time of the alleged incident in California. That masseur claimed he simply got the dates wrong.


Meanwhile, Truesdale’s name surfaced in a RadarOnline report on Tuesday. The celebrity website said he lost his job as a massage therapist in North Carolina about eight years ago. He was working at the plush Ballantyne Day Spa in Charlotte when he was axed for being “sexually inappropriate” with clients and co-workers, Radar reported.


An unnamed source told Radar that patrons claimed Truesdale removed the sheets placed over women during massages and touched their breasts.

“The numerous attempts by supporters of Mr. Travolta to discredit John Doe No. 2 will ultimately be unsuccessful,” Allred said.

By Nancy Dillon / NEW YORK DAILY NEWS
Posted by joe levin at 7:45 AM