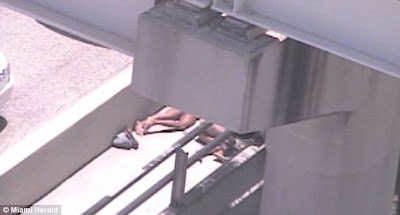 A man whose face was eaten by a naked attacker in Miami is fighting for his life as authorities try to piece together just what sparked the horrific incident.

The identity of the two men remains unclear, although some reports suggest they may have been homeless men living beneath the MacArthur Causeway, which connects downtown Miami to South Beach.

The gruesome attack went down in broad daylight Saturday afternoon, authorities said. The two men are visible in surveillance video captured from a nearby building, but it is unclear if the entire horror show was recorded.

The pair appeared to be fighting, said Larry Vega, a Miami resident who first witnessed the nightmarish scene on an off-ramp by Biscayne Boulevard, which is near the offices of The Miami Herald newspaper.

“When I looked forward, there's a guy on top of another person, eating him up like, just tearing, tearing his face apart,” he told Local 10 News. “It’s going to take some time to forget. I never thought I would see someone else eating someone. It was really, really horrific.”


He was “tearing up pieces of his flesh, you know, his ears, his nose,” Vega said. “He was tearing it up and throwing it away... it was really a horrific scene.”

The father of three alerted a police officer “that a homeless man was killing another person by biting and ripping his face to death.”

Vega said the cop ordered the man to stop, but he did not listen. He then drew his gun, but “the guy just stood... with pieces of flesh in his mouth and he growled,” he told WSVN 13 News.

The officer, who was not identified by police, then shot the Hannibal Lector wanna-be several times.

“Based on the information provided, our Miami police officer is a hero and saved a life,” Javier Ortiz, spokesman for Miami police’s Fraternal Order of Police told the Miami Herald.

The victim, who lost about 75% of his face, was rushed to Jackson Memorial Hospital, according to WSVN 13 News. He remains in crticial condition.

“There was blood all over, you couldn’t even distinguish a face,” Vega told Local 10 News, saying the victim appeared to be like the zombies seen in AMC’s “The Walking Dead.”


Authorities suspect the face-chomping madman may have been using a new, potent type of LSD.


“What’s happening is whenever we see that a person has taken all of his clothes off and has become violent, it’s indicative of this excited delirium that’s caused by [an\] overdose of drugs,” Armando Aguilar of the Miami Fraternal Order of Police told WSVN 13 News. “What’s happening is inside their body their organs are burning up alive.”